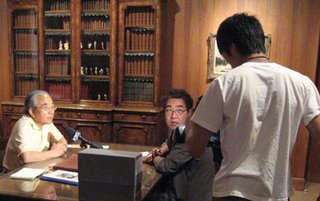 In eight short months there have been moments when I've proudly stood by and watched my son do something for the first time. There will be many more. Today, as a son, I stood by in a proud moment and watched my dad get some recognition for a discovery he made yesterday.

While doing research he came across an old song book which answers the question that nobody could answer for almost a century: Who wrote the lyrics to the Korean National Anthem?

Phone calls were made, the right people were notified, and soon Koreans everywhere will know that Yun Chiho is the true author. As for me, I knew the answer before I even knew that the question was being asked! Spending time with his grandson for the first time, solving Korean national debates - it's all in a day's work for this historian-dad of mine.

In the picture above, my dad is being interviewed by KBS (Korean Broadcasting System) who will be airing the story in the LA area tonight or tomorrow night. Soon after it will air in Korea.

Now I just need to learn the song for myself, so I can add it to my repertoire of national anthems that I sing to my son at night.
Posted by Charlie at 4:18 PM

You know, I'm an idiot, since I never realized you were the same "Charlie" over at "Charlie and Nina".

This is one of the coolest things ever. It must be cool to be the son of a man like that.