I thought some of you might enjoy this. Jamie Oliver, a winner of the 2010 TED Prize, talks about how America can help its young people live longer and healthier through better school cafeteria programs and education about food. His recommendations are interesting: kids should know what they're eating, and they should be able to cook at least ten healthy recipes by the time they leave school.

I credit Jamie Oliver for starting my own interest in cooking. He makes it sound fun, and he communicates his passion for food through his words. I think this is a good prescription not just for schools, but also for parents. We parents need to do more to raise our children to appreciate and to know food.
Posted by bigWOWO at 5:13 PM 3 comments:

Email ThisBlogThis!Share to TwitterShare to FacebookShare to Pinterest
Labels: food

Joe and Heidi Wang on the Amazing Race 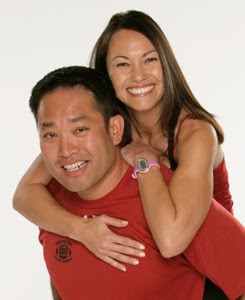 I just got the newsflash from 8 Asians: Joe and Heidi Wang will be running the Amazing Race, beginning this Sunday on CBS. Like the winners Tammy and Victor Jih from last season, the team has an Asian American male and an Asian American female, but unlike last season, they're not brother and sister. Woohoo for diversity! They're also parents of two children, so cheers for the Rice Daddy.

I don't know how long this will be up, but you can see a video of them here. They've got an awesome bio too; check out the link under their name above. Mixing it up with them this season will be Jordan and Jeff from Big Brother (which I only saw a part of--the part where the blasian brother got axed) and the infamous Miss Carolina 2007 who stumbled on public TV when someone asked a hard question.
Posted by bigWOWO at 3:40 PM 2 comments: