Who Loves More, Parents or Children? 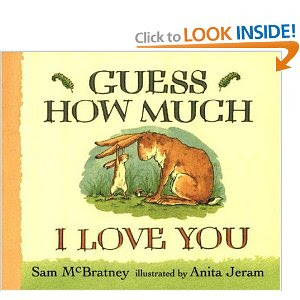 I caught an interesting dialogue on parental love at Daddy Dialectic and Hugo Schwyzer. In the original post, Jeff at Daddy Dialectic writes about Sam McBratney’s children's book "Guess How Much I Love You," where an adult rabbit and child rabbit frolic and take turns making statements about how much they love the other. Whenever the child makes a comparison, the adult makes a bigger comparison. So for example, in the original book McBratney writes:


"I love you as high as I can reach," said Little Nutbrown Hare.

I love you as high as I can reach," said Big Nutbrown Hare.


Am I the only one who thinks the adult rabbit, like the father in the scenario I laid out at the beginning of this post, is a bit of an asshole? Aren’t the adult rabbit’s constant moves to up the ante on the little rabbit evidence of an ego that’s out of whack? Even when channeled through professions of love, this kind of behavior doesn’t feel particularly tender to me. In fact, it seems to me that the adult rabbit’s answer to the question of how much love it has for the little rabbit should be, “Not enough to restrain myself from besting your every move.”

Hugo Schwyzer read the book differently, and so did I. As Hugo points out in his blog post, it's natural--within this society at least--for parents to love their children more than children love their parents, and he read the book as a comparison of the asymmetrical love between parents and children. Hugo writes about the hypothetical burning building question. Who would you save if you had to make one choice--your mother or your daughter? He says that he would save his daughter, without question.

What I found interesting was what he wrote here:


One of the great truisms in contemporary therapeutic Western culture is that parent-child love is always uneven, or should be. Unlike the love between spouses, where equal affection and passion is the ideal, a parent should always love a child more than the child loves the parent. I know perfectly well that this is not a universal cultural ideal, though I frankly wish it were. It’s not a two-way street: we give to our children unconditionally not to receive the same level of devotion in return, but to equip them for their lives.

I don't know where I got this from, but somewhere in the back of my head I remember someone asking the same hypothetical of a burning building to a Chinese man. He answered, "I would save my mother. Why? I can always have another daughter. I only get one mother." Granted, this guy may have come from the old culture where people had kids in order to have someone to take care of them in old age, the "traditional 401(k)," and there isn't a right answer that applies to all families--some modern parents, Asian and White, would be risking their lives to save the family antiques and jewelry before either daughter or mother. But what do we know about parental love from a cultural angle?

And fast forward to today: is there a cultural movement for Asian Americans to express love for their children? And what do you think about the original story?
Posted by bigWOWO at 2:04 PM

I have spoken to my dad (Chinese immigrant) and one of my closest friends (Vietnamese) and they both say that a parent's love is greater for their child than the reverse.

I haven't read the original story, but it creeps me out a little. As a parent, we take charge of a helpless newborn from day one, changing diapers, feeding them, helping them get dressed and guide them as they grow and evolve into adults. It's not about bigger, higher or faster.

The children do love us, but it's anyone's guess whether they'll stick around to return the favour and change our diapers when we lose our marbles in old age...

Hi there, just became alert to your blog through Google, and found that it is really informative. I’m going to watch out for brussels. I will be grateful if you continue this in future. Numerous people will be benefited from your writing. Cheers!