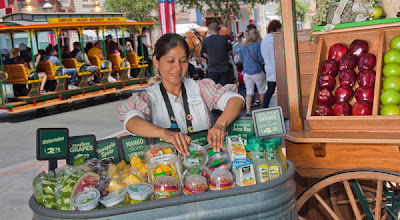 (Originally posted with changes at bigWOWO.)

Continuing the food discussion, I was so happy to see this: Disney to Restrict Junk-Food Ads. The article begins:


The Walt Disney Company, in an effort to address concerns about entertainment’s role in childhood obesity, plans to announce on Tuesday that all products advertised on its child-focused television channels, radio stations and Web sites must comply with a strict new set of nutritional standards.

In an era where corporations are throwing money to buy influence in ways that harm our children, it is so refreshing to see that a wealthy corporation, for once, is doing the right thing. And make no mistake, the fast food corporations and big businesses ARE targeting our children.


The big chains like McDonald's have been aggressively and specifically targeting children for decades. When Ray Kroc first started expanding the McDonald's chain, he would hop in a Cessna and fly around looking for prime real estate as close to schools as possible. Today they use satellite technology to locate the same type of properties. These companies are literally stalking our children. They've even found ways to get inside schools nd be part of the public school lunch menus. --from Lunch Lessons: Changing the Way We Feed Our Children by Ann Cooper and Lisa M. Holmes, pp. xv-xvi

I've had my issues with Disney in the past, and I'll probably have some issues in the future, but this is a good thing. If you have time, take some time to send them a letter of appreciation. Maybe contact the CEO directly:

Again, I can't express how important it is for a big company like Disney to take a stand. They've partnered with Michelle Obama too. I listen to conservative radio sometimes, and I hear how the pundits attack Michelle Obama, accusing her of overstepping by trying to advocate healthy diets, saying that no one wants it. Well, guess what? Disney wants it! The article says:


Robert A. Iger, Disney’s chairman, said he felt strongly that “companies in a position to help with solutions to childhood obesity should do just that,” but added: “This is not altruistic. This is about smart business.”

Smart business or not, they ought to be commended for doing the right thing.
Posted by bigWOWO at 9:53 AM

Amazing,really excellent info.Your blog is really cool.I bookmarked this and may come back again.

Looks delicious ! Love your pictures, how colourful.And i got lot of information from yours.Thank you for your useful sharing.
ewald struggl

This is a great post; it was very informative. I look forward in reading
more of your work. Also, I made sure to bookmark your website so I can come back later. I enjoyed every moment of reading it

Amazing, really excellent info ! Love your pictures, how colorful. And i got lot of information from yours.Thank you for your useful sharing.

I have been reading out a few of your articles and i can state pretty nice stuff. I will surely bookmark your website.

Very good news. Disney doing many works like this. It will be very useful for kids as they love it.

Seems a good and interesting book to read from the cover. For all the kiddies out there. Go and get this one before it gets too late!

This is the incredible step was taken by disney. Very few people think about others usually people only care about their business and profit but i really liked your thoughts.

Do My Operating System Homework said...

Really I Appreciate The Effort You Made To Share The Knowledge. This Is Really A Great Stuff For Sharing. Keep It Up . Thanks For Sharing.

This A Good Way To Appreciate The Teacher As They Put Their Efforts To Train Students. UK Dissertation Writers Appreciates The Teachers.

Thank you for sharing such a useful post. PLease search desksta to discover nice photos and videos on instagram.

Most prostate cancers are adenocarcinomas, cancers that arise in glandular cells of the prostate’s epithelial tissue. Prostate cancers usually progress slowly and produce no symptoms in the initial stages. Eventually, the tumor may enlarge like mine too, the prostate gland, pressing on the urethra and causing painful or frequent urination and blood in the urine. So I was so uncomfortable with this prostate cancer diseases then I decided to do online search on how to cure cancer because I well have read a lot about herbal medicine, I came across a lot of testimony how Dr Itua cure HIV/herpes then Cancer was listed below the comment.with courage I contacted Dr Itua and he sent me his herbal medicine through Courier service then I was asked to pick it up at my post office which i quickly did. I contacted Dr Itua that I have received my herbal medicine so he instructed me on how to drink it for three weeks and that is how Dr Itua Herbal Medicine cures my prostate Cancer, The treatment takes three weeks and I was cured completely. Dr Itua is a god sent and I thank him every day of my life. Contact him now On: Email:drituaherbalcenter@gmail.com/ Whatsapp:+2348149277967. He listed that he can as well cure the following diseases below.... Cerebral Amides. Lung Cancer,Brain cancer,Esophageal cancer,Gallbladder cancer,Gestational trophoblastic disease,Head and neck cancer,Hodgkin lymphoma Intestinal cancer,Kidney cancer,Leukemia,Liver cancer,Melanoma,Mesothelioma,Multiple myeloma,Neuroendocrine tumors,Hodgkin lymphoma,Oral cancer,Ovarian cancer,Sinus cancer,Soft tissue sarcoma,Spinal cancer,Stomach cancer,Meniere's disease , Testicular cancer,Throat cancer,Thyroid Cancer,Uterine cancer,Vaginal cancer,Vulvar cancer. Alzheimer's disease,Autism,measles, tetanus, whooping cough, tuberculosis, polio and diphtheria Adrenocortical carcinoma. Alma, Uterine Cancer, Breast Cancer, Allergic diseases. Kidney cancer, Love Spell, Glaucoma., Cataracts,Macular degeneration,Cardiovascular disease,Lung disease.Enlarged prostate,Osteoporosis.Generalized dermatitis,Alzheimer's disease,Brain Tumor,Lupus,Endometrial Cancer, cerebrovascular diseases
Dementia.Colo rectal cancer, Lottery Spell, Bladder Cancer, Skin Cancer,Ovarian Cancer,Pancreatic Cancer, HIV /Aids,Brain Tumor, Herpes, Non-Hodgkin lymphoma, Inflammatory bowel disease, Copd, Diabetes, Hepatitis