High and low points of the Olympics so far...

If you haven't been living under a rock for the past week and a half, you've already heard that athletes from around the world are competing in the 2008 Beijing Olympics. I have to say that I'm a huge fan of the summer and winter games, despite all the controversy of the games being held in China (insert complaint of Beijing Olympics here, human rights violations, lip-syncing cute Chinese girl, terrible tragedy cover-ups, fake fireworks displays, etc...) it has been quite interesting to watch. Golden boy, Michael Phelps achieving the impossible (shh, let's not talk about Mark Spitz reaction) has been amazing. Although my wife is not happy about all the world records being shattered due to the technology of the LZR racer swimsuits, she would just prefer them to wear the regular Speedos.

Also being able to watch the games in High Definition has been such a treat! The color, detail and resolution makes everything look better. I've been trying to get my son to watch, but since M is only 21 months old, it's been difficult to get him to be interested in it all. The only way it would hold his interest if one of the competitors was Thomas the Tank himself.

So with any Olympic games there's drama and controversy, but one thing I just can't believe is the perpetuation of stupidity and racism. Both Spanish basketball teams posed for this photo for a promotional ad to wish them good luck in the 2008 games. Was there no one among Spain's Basketball Federation to review the picture and say, "Hey wait, this isn't probably the best idea." Instead they said: "No wait, it's really funny and people around the world will think it's funny." Let's just say speaking from an Asian perspective, no laughing is going on here. 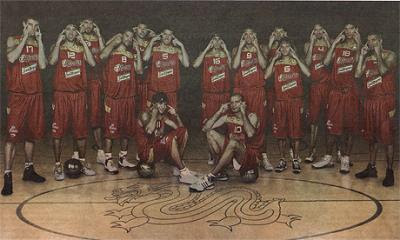 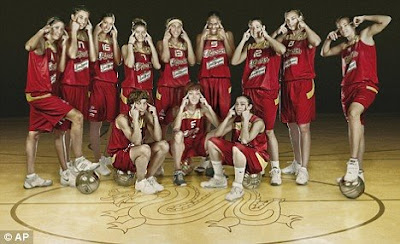 Do people perpetuate racial stereotypes because they don't perceive it as being harmful? At least that's how some of the players reacted. Well let this be a message to you, "IT IS HARMFUL AND PLEASE STOP!" I thought things like this would eventually die with time. Things that I grew up with in the school yard, incidences I would talk to my son about, but hope that he would never have to face. We call ourselves progressive and contemporary, but it's often disappointing to see examples like this. You might be interested to read about some of the player's comments here.

Posted by Obiwanhavanese at 10:43 AM

this might sound like i'm nit-picking, but i think it's indicative of the ignorance re: asians in general:
the other day while watching the coverage on NBC, the commenter (white guy, salt and pepper hair who does the coverage during the days) noted that a "south korean" shooter had been DQed for doping . . . i thought "aw man, that's too bad." then i looked it up on google - it was a NORTH korean shooter. i know that's not a HUGE deal, but to me it is. not because it was a south vs. north thing, but because it felt a little too much like a 'they-all-look-alike' thing. or maybe i'm just olympic size PMSing . . .

oh man, I hadn't hear about this spanish photo thing. this is too bad.

Boycott Spanish courier company Seur, the next time you're in Spain, needing, um, a courier. According to an article in the NYT, Seur was the sponsor of the photo, and insisted on this particular pose.

oh man, I hadn't hear about this spanish photo thing. this is too bad.

Boycott Spanish courier company Seur, the next time you're in Spain, needing, um, a courier. According to an article in the NYT, Seur was the sponsor of the photo, and insisted on this particular pose.

sigh, I'm still reading the times, and the Spanish are refusing to apologize, saying that their intentions were humorous.

Shouldn't it be true that the maker of the insensitive remark doesn't get to decide whether the remark offends the target group?

From the times article:

"The Spanish coach, Aíto García Reneses, declined to apologize for the photograph, which he said he had not seen. He did not appear in the image. He said the intention was a joke.

"The Spanish Olympic Committee declined comment and a spokesman for the Spanish Basketball Federation said that its president, José Luis Sáez, would comment after Spain’s game on Thursday. He said the intent was not to offend."

I've posted my initial reaction to the spain team fotos on my blog, & also a comment on KIMCHI MAMAS, so I only have this to add... this was not just one or two idiots ~ this was displaying a team's pervasive racist mentality.(actually more than 1 team) The reasoning or excuses offered by spain make it even darker. Even more offensive to pull this crap at the Olympics, in China! It should not be condoned or ignored. So,here is the contact info for the Spanish Olympic Committee. All Rice Daddies together can speak from a position of power! :

You mean, pulling one's eyes back doesn't constitute an "affectionate gesture" or a gesture that "was one of affection, friendliness and recognition"?!?!?!? Newsflash to Spain, you need your ass handed to you again, like in 1898?

I too made comments about it on my blog.

What I also found funny was that the Spanish team tried to say that because their sponsor for clothes was Chinese, they're not racist at all.

I am reminded of Chinese "Darkie" toothpaste. Once the company learned its English name was offensive, an apology was made and the name was changed to "Darlie." If Spain wants to be Chinese so desperately, they should learn from the people they wish to emulate and apologize for the offense.

Its not like its the first time it has happened in Spain. African-British driver Lewis Hamilton was taunted during his F-1 races. Thierry Henry, a black Frenchman while playing for Arsenal in Spain, and others in soccer have rallied against racism in that country. I wouldn't call it racism as much as ignorance, but the nonchalant attitude about it is what shows the chasm that still exists in some parts of Europe with regard to race.