If our baby's babble factored into our choice for president, we'd probably have to toss our votes to Ron Paul, or whatever candidate's name comes close to "rrrraaaaappppplllllllaaaaaalllrrrr."

Does your child support any of the Presidential candidates? Hit us up in the comments.
Posted by SoulSnax at 9:16 AM 4 comments:

First all Asian-American kiss on TV

EDIT: I think I need to clarify why I believe this image is important to Asian Americans.

I was born in the US and while I have seen Asians kissing on foreign movies it never seemed to resonate to me. Too many people simply lump Asians who live in Asia with Asians who live in America (the perpetual foreigner syndrome), and while we have similarities there are many overlooked differences. In fact, most often when an Asian American female is on TV she'll be locking lips with anyone but an Asian guy.

So when I see two US born Asians locking lips, I see myself and my wife. (I've been told only 1 in 4 US born Chinese American males wind up marrying a US born Chinese American female. ) The characters in Cashmere Mafia both grew up in the US, both didn't have accents, both were into each other for reasons other than ethnicity, etc. It was really refreshing to see.

P.S. And no, neither Sun and Jin on Lost or Hiro on Heroes count. None of them are Americans and FFS Jin can't even speak English. Do you see why Asian Americans don't relate to them?
Posted by Monster Daddy at 9:12 PM 22 comments:

Jakers! The Adventures of Piggley Winks, is the animated show about Piggley Winks, an anthropomorphic Irish pig who shares stories of his childhood in Ireland with his American grandchildren.

At the end of each episode is a segment called "Meet the Grandparents" in which real-life human children talk with their own grandparents about their childhood experiences...

From the episode "Dannan's American Cousin" is a Filipino granddad, or Lolo, as we would call him:


From the episode "Wish Upon a Story" is this Chinese grandma, with her grandson. I know, I know, the kid obviously doesn't look Chinese. That's probably because he is one of many white kids adopted into Asian families. ;) 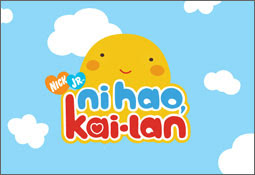 The curriculum for the show, as outlined on the Nick Jr. website includes the following:
Our lil Sunshine is probably too young (12 months) to get anything useful out of the show. But in the absence of a Berlitz course, you can bet that this RiceDaddy will be watching hoping to learn as much Mandarin as he can.
Posted by SoulSnax at 1:37 PM 2 comments:

I don't believe what I am seeing. Could it be? An Asian American woman paired with an Asian American man on TV? Not in Chinatown, no martial arts, no stupid accents, but there's.... romance????

Cashmere Mafia is on ABC and the show with this character is expected to premiere on 1/24. I'll have to record this one and see how they play it out. Love to hear everyone's opinion when it airs.
Posted by Monster Daddy at 1:28 PM 6 comments:

Ok, first, read this story. It's about how Des Moines mom Jane Hambleton sold her son's car after finding a bottle of liquor under the front seat. It's earned her some instant celebrity.

Then take an extra close look at the photo.

Email ThisBlogThis!Share to TwitterShare to FacebookShare to Pinterest
Labels: Family

Ok, a more cheery story to counter the sheer badness of the previous one:

Three Chinese orphans who were cribmates in China are adopted - by coincidence - by three families who all live in the same neighborhood in Brooklyn.

Email ThisBlogThis!Share to TwitterShare to FacebookShare to Pinterest
Labels: Family

By GARRY MITCHELL – 1 hour ago

BAYOU LA BATRE, Ala. (AP) — A day after reporting his four young children were missing, a shrimp fisherman broke down and confessed that he threw them off an 80-foot-high bridge to their deaths, authorities said Wednesday.
Lam Luong, 37, was charged with four counts of capital murder, and divers searched the murky waters for the bodies of the youngsters, who ranged in age from a few months to 3 years.

Luong had a drug habit and had argued with his wife, Ngoc Phan, before taking the children, said Phan's brother-in-law, Kam Phengsisomboun.
Luong's girlfriend, who was living in a hotel in nearby Gulfport, Miss., figured into the couple's argument on Sunday and then on Monday morning, family members and police said.

Authorities said they believe Luong then drove Monday to the two-lane Dauphin Island bridge over the Intracoastal Waterway, stopped at the highest part of the span and threw the youngsters over the side.
Luong and his wife reported the children missing Monday. He initially told police that he had given the kids to his girlfriend and that she failed to return them, investigators and family members said.
But authorities said they found holes in his account, and he later changed his story.

Missing and presumed dead were 4-month-old Danny Luong; 1-year-old Lindsey Luong; 2-year-old Hannah Luong; and 3-year-old Ryan Phan. Phan is not the man's biological child, but Luong raised him from infancy, authorities said.
About 70 people in boats and helicopters searched water as deep as 55 feet. The search area covered 100 square miles because the current might have swept the children away, Sheriff Sam Cochran said.
The search was called off late Wednesday afternoon when dense fog rolled in, completely obscuring the bridge. It was to resume in the morning, weather permitting.

Luong was scheduled to appear in court Thursday. District Attorney John Tyson said he did not believe Luong had a lawyer.
Luong came to Alabama from Vietnam in 1984 and worked as a shrimper, Phengsisomboun said. The couple lived with Phan's mother at Bayou La Batre, a fishing village 20 miles southwest of Mobile with a large Southeast Asian community.

Phengsisomboun said the couple had recently moved back to the area from Hinesville, Ga.

The family initially feared he had traded the children to support his drug habit, Phengsisomboun said. Luong had a crack habit and had run through an insurance settlement from an auto accident, he said.
Phengsisomboun said he was later told by investigators that a witness had seen someone throw a bundle from the bridge and then saw three children in a nearby car.

Authorities in Mobile confirmed Luong had a history of drug abuse but had no details.

He was arrested in October in Hinesville on a crack-possession charge. The case has not been acted on by a grand jury.

Phan, 23, was in seclusion Wednesday morning at her mother's brick home, the front porch cluttered with children's shoes.

Some family members and friends held out hope that the children weren't dead.
"I just pray for the kids, that they are still alive," said Van Lam, a family friend who was at a market with Phan's mother Wednesday afternoon.