but when it comes to product recalls all you see in the news is MADE IN CHINA.

That's right and it's pissing me off. It seems every single news article on a recall has to focus on the fact the products were Made in China whether it was relevant to the recall or not.

Take the latest about recalled baby cribs (which is very sad of course). The cribs in question were designed by an American company and aren't even defective. The problem is some buyers installed the gate upside down which caused the infant deaths.

So why does EVERY news article point out that it was Made in China?! Now how the hell is that relevant? I mean why not blame everything on China? Children who have ADHD - they are playing with toys Made in China, childhood obesity - the candy wrappers were Made in China, wait can't we blame the Iraq war mess on China, let's see I think the ink on the box that holds the bullets were MADE IN CHINA!

Haha. Seems like a pretty funny Saturday Night Live skit if it weren't played out again and again across the news.

The problem seems to be that Americans are falling for this scapegoating hook line and sinker. Some of the news articles allow reader comments and it sure seems that the average American reader believes this crap.

At least Mattel did the extraordinary thing of apologizing to China for their recalls of their defective designed toys, i.e. the tiny magnets that kids would swallow. Would be nice to see more people take responsibility.
Posted by Monster Daddy at 10:20 AM 15 comments:

Nova Scotia in the house!

When my kids grow up, I hope they are as powerful as these two high school seniors:

"Two Nova Scotia students are being praised across North America for the way they turned the tide against the bullies who picked on a fellow student for wearing pink....

"When the bullied student, who has never been identified, walked into school to see his fellow students decked out in pink, some of his classmates said it was a powerful moment. He may have even blushed a little."
Posted by thisislarry at 4:56 PM 4 comments:

If anything, they should be allowed to drive at 8 months!!
Posted by SoulSnax at 10:37 PM 3 comments:

"Television: The Drug of the Nation," the Disposable Heroes of Hiphoprisy once said. If that equation holds true, then Yo Gabba Gabba is a goofball of methamphetamine and nitrous.

Anybody else up on Yo Gabba Gabba? It's basically a Nick Jr. show aimed at preschoolers and adults who fall into the Grups category. A futuristic host in orange spandex opens a boombox to reveal the five characters (designed by Kid Robot). They flop around and sing songs about eating your food, the benefits of sleep, sharing, etc. The songs themselves are amazingly treacle-free and dammit, catchy. Peep "Party in My Tummy (So Yummy)" which owes a lot to Miami bass anthems as it does to the principles of good nutrition:

As you can see, Yo Gabba Gabba is full of hipster modifiers. There's cutting edge animation by Evan Dorkin and Sarah Dyer, wink-wink appearances by Mya, Tony Hawk, Elijah Wood, the Aggrolites, the Shins, Cornelius and Smoosh. Devo's Mark Mothersbaugh does a drawing segment. And for you hip-hop heads, Biz Markie introduces preschoolers to the "Biz Beat of the Day." Future guests include Rahzel, Salteens and Shiny Toy Guns. And some of the songs get actual remixes by DJs like Bassbin Twins.

So how does it translate? Wifey and I TIVO'd a couple episodes and found we liked the music and the guests, but found the format of quick short-attention span bits to be annoying and nonsensical, like watching a kiddie version of Sprockets. The four characters, one resembling a red vibrator, are on the ridiculous side. Then again, I grew up in the era of Banana Splits (Danger Island!), Land of the Lost and HR Pufnstuf, which were equally absurd. I get what YGG is doing, I just think they try too hard to snag adults and don't give kids enough credit for being attentive.

We gave Maceo a taste of the show and he quickly adapted to it (he doesn't get much TV, maybe an hour every other day, so that might play into it). Yo Gabba Gabba has yet to make his vocabulary like Elmo, but give him time.

(BTW, did you guys see the Chris Brown/Elmo collabo? Good stuff from the 2007 season)

Anybody else love/hate Yo Gabba Gabba?

Yesterday was Grandparents' Day, which, I gather, is sort of seen as a made-up, Hallmark non-holiday even though it isn't. In honor of the day, I thought I'd post this link to a snippet of video of The Pumpkin's grandmother (my mom) talking about my grandfather (her dad, The Pumpkin's great-grandfather, whom she'll never meet).

My grandfather, Koichi Tsunoda, a nisei born in Northern California to immigrant parents, was one of those gardeners. He passed away when I was in middle school, but unfortunately, I don't remember a lot about him. For most of my life, he suffered from Parkinson's Disease, and what I remember are after-school visits to the nursing homes he lived in, and holiday family dinners for which my dad picked him up from said nursing homes and at which I always made sure to set up a t.v. tray in the same spot in front of the sofa for him. I "remember" pictures, photographs of him and me on a family trip to Solvang, or to Disneyland, or out to Indio to visit his old date-farmer friends, but I only know they happened because of the pictures. By the time I was old enough and aware enough to want to ask him about his life, his pre-war childhood as the son of issei farmers, about internment and what made him break with the rest of his family to become a "no-no boy" and take his new bride with him, just the two of them, to the Tule Lake camp for "the disloyal," where my mother was born, or about being a gardener in LA at a time when all the gardeners were JA, it was too late.

At the opening of the JANM exhibit, some folks from the museum's online community history project, Discover Nikkei, were asking folks who were related to or knew JA gardeners to talk a bit in front of their camera. It being Father's Day, I basically pushed my reluctant mother into the booth. "Do it for Grandpa," I said.

I didn't know until the other day, when I was randomly looking at the website, that they had put her clip up. She hadn't told me. But you know, she has nothing to be embarassed about. She simply shared a memory of her father, my grandfather, and in doing so, made that memory permanent, for me, his grandson who never got to know that part of him, and for her granddaughter, who will know the love and legacy of that part of her family through her grandmother.

Happy Grandparents' Day, Grandpa, and to you, too, Mom.

View clip and read transcript here.
Posted by daddy in a strange land at 4:28 PM 6 comments:

Email ThisBlogThis!Share to TwitterShare to FacebookShare to Pinterest
Labels: grandparents 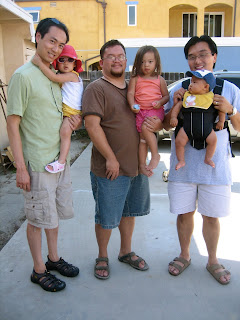 La dra. and I hosted our annual end-of-summer "hang out with friends we never get to see anymore cuz we live in frickin' Bakersfield" beach party this past Sunday at my grandmother's Orange County beach house. It was smaller this year, as for some reason lots of people had planned Labor Day weekend weddings this year, it seems (and la dra.'s residency class' sports medicine doc had to work a NASCAR race, heh—somehow car crash triage doesn't seem like athletic injuries to me, but whatever!). And oh yeah, a bunch of people couldn't come this year cuz they were being all inconsiderate and sitting around waiting to give birth or something—and none of them even had false labor that day! Lame excuses, man...

But anyway, there were a lot of kids, mostly the rapidly growing (in age and size) brood of my dear wife's residency classmates, and The Pumpkin had so much fun playing with them all. Last year, we were happy to meet a couple Kimchi Mamas—this year happily saw the resurgence of long-dormant Rice Daddy Papa Law and our good real-life-friend-forced-to-join-the-blog Dr. Lo Siento (who, sniff, moved from frickin' Bako back to the OC). To our other SoCal parentblogging friends who couldn't make it, we missed you!

Meeting friends from the blogosphere in real life has been a fun, unexpected byproduct of this whole blogging thing. Last month we got to host the Lotus Life fam (plus the Superhas, who are always over here anyway) for a nice playdate/lunch while they were on their way back north from Disneyland. And last week, we had frequent commenter Peachboy (and future RD contributor if I nudge him enough, and do it in public like this, right?) over for dinner while he was stuck in frickin' Bako on business. Dude's like six-degrees-of-Kevin-Bacon with the RD crew—he knew Soccer Dad from childhood, went to school with Poppa Large, lives near Henri whom he met b/c their wives were in a mommy class together, and now, this weekend, come to find out that Papa Law had him as a TA! (And according to him, Peachboy was that TA, you know, the cool/hip/sexy one all the undergrad ladies wanted as their section leader, heh.) But anyway, meeting bloggers (and their children!) offline is fun! (FYI NorCal folks, we're in SF at the end of April!)

Happy end-of summer, y'all! Hope this frickin' Bako heat goes away soon...
Posted by daddy in a strange land at 7:08 AM 3 comments:

I just watched my daughter, Caitlyn (now just a couple months past 2 years), complete 20 minutes of non-stop running in a circle. The reason for this late night aerobic activity? "Shall We Dance" from "The King and I." Usually, she and I go to the park after dinner to play before coming home to bathe and go to bed. But with the recent heatwave (still feels like 100 degrees outside), indoor activity is all we've managed to muster all day. At least we found something to tire her out!

P.S. Thanks for Daddy In A Strange Land for hosting his home-away-from-home Labor Day beach party and giving me a swift kick in the posterior to get me writing again.
Posted by Cyril at 8:32 PM 2 comments: