So I Must Kill You!

While cleaning the house, I found this book that my parents brought back from a trip to Asia as a gift for my kids. Either something's lost in translation, or children's stories in Hong Kong are just straight-up hardcore: 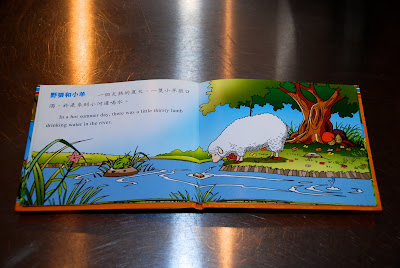 "In a hot summer day, there was a little thirsty lamb drinking water in the river." 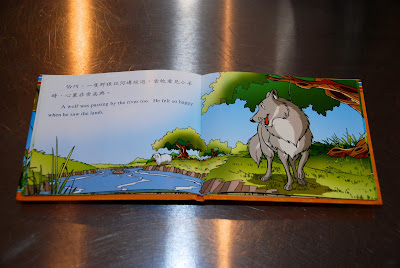 "A wolf was passing by the river, too. He felt so happy when he saw the lamb." 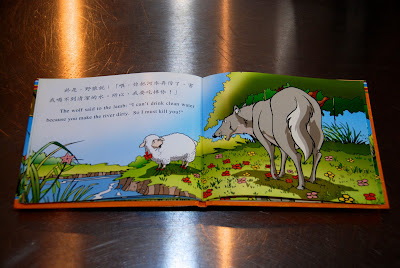 "The wolf said to the lamb: 'I can't drink clean water because you make the river dirty. So I must kill you!'" 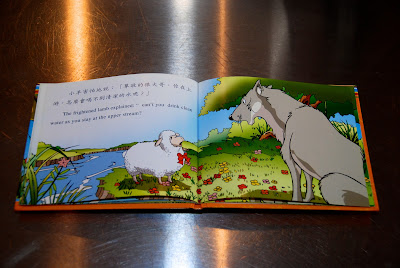 "The frightened lamb explained: 'Can't you drink clean water as you stay at the upper stream?'" 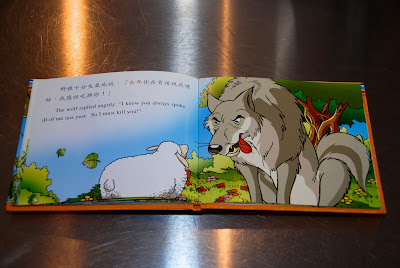 "The wolf replied angrily: 'I know you always spoke ill of me last year. So I must kill you!'" 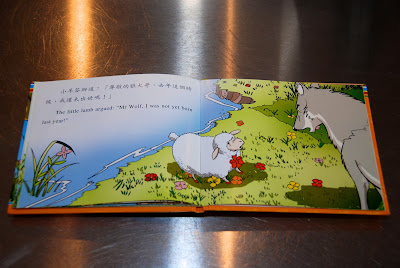 "The little lamb argued: 'Mr. Wolf, I was not yet born last year!'" 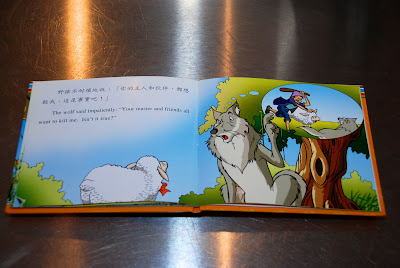 "The wolf said impatiently: 'Your master and friends all want to kill me. Isn't it true?'" 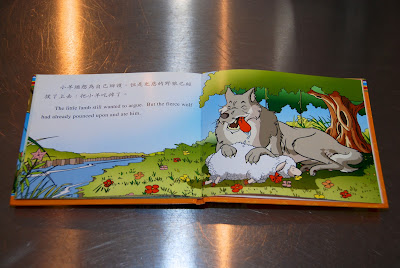 "The little lamb still wanted to argue. But the fierce wolf had already pounced upon and ate him."

The moral of the story: Lamb is super-tasty.
Posted by fbomb at 3:43 PM 5 comments:

I had dinner with someone recently who complained that her mother was not supportive of her life decisions. I pointed out that everyone else around her (personally and professionally) believed she was making smart strategic decisions about her life. She said something to the effect of: “I know but it would just be nice if she (her mother) supported me too. After all she is my mother.”

I was reminded of an incident between my eldest son and me. It happened several years ago at a Christmas party. Without reliving the uncomfortable details, it was a situation where I took someone else’s word over his. The incident is a poignant one for me because as it turned out my son was right and I realized the devastating impact my doubts can have on my children.

I have since ceased believing in absolutes and my own infallibility. Being a parent does not automatically validate advice as being good or opinion as being informed. It does however stress the necessity of open minds and open ears for both fathers and their children. I failed as a father that Christmas. I failed to listen as I’ve often told my son to do. And I forsook the fact that my children “know” things too. In fact, they might just know more than us “Grown Ups,” as their unfettered minds absorb the many new and exciting experiences from the burgeoning world around them.

When did it happen? When did we become so dull, gray, and “grown up”? I can’t help wondering about the tipping point. When was it where I became so “Grown Up” and closed up and stop considering the infinite possibilities of living and just settled for the simply finite ones tethered to the observable world? And what pushed me over that edge?

I remember it was somewhere around high school/late middle school my father became obsessed with telling me I had “to respect the reality.”  I remember how stubbornly I clung to my dreams – my beliefs – my idealism then. The Christmas incident showed me just how misplaced my values had become. I valued the grown up notion of being right over listening to someone important to my very being itself.

Digging around the Web and Googling, I couldn’t find anything on the direct impact of parental doubt on a child. However, there were several resources on addressing self doubt and if you liken to parental doubt to failure there was an abundance of information on that. Most articles on failure that 'I’ve come across focus on the restoration of confidence like this Parent Zone article, “Handling Fear Of Failure in Children,” and this Associated Content article, “Help Your Children Deal With Failure.” I even found this video on the On the Ball Parenting Blog:

“If you’ve never failed, you’ve never lived” that’s the closing statement of the video. After I learned I was wrong I apologized immediately to my son that Christmas night. I told my dinner companion what I wish I would have said to my son.

I told my companion that sometimes as parents we get so caught up in the ways we’ve been seriously hurt that we’ll do anything to keep our children from having even remotely similar experiences (even though quite rationally there is very little we can do to control the experiences our children will have).

I told my companion that regardless whether her mother understood the decisions she has made, I am certain her mother is proud of her regardless of the path she’s chosen.

Posted by Unknown at 3:00 AM No comments:

I am Nels. Some of you may know of my web site, AArisings. I'm a father of two children - a son who is 7 years old and a daughter who is 4 years old. This is my first entry on Rice Daddies.

During the summer, the big buzz in the music world was Cee-Lo Green's song "F**k You." I shared the catchy song and video via YouTube with my wife because I thought she would get a kick out of it. We were in our home office watching the video while the kids were playing together in the living room. Every so often the kids would pop into the office to see what we were doing and my wife would quickly stop the video so that the kids' virgin ears would not be exposed to the F-bomb. Little did we know that our son would be exposed to the F-bomb in other ways, however.

Last month my son and I were sitting on the couch when he declared, "I know a bad word."

I replied "oh really? What is the word?" thinking it would be something like the word "stupid" or "idiot" or even "fat" (which we had declared a not-so-nice word when referring to people).

He said "it starts with F," to which I was sure he was thinking of the word "fat." But then continued spelling the word with "U-C-K."

For a moment, I was speechless but then put my eyes back into their sockets and immediately reacted with a "that really is a bad word! You should not say that word." My son shelved that discussion away quickly after that, as if he had never spelled the word.

Since that time I've thought about the moment and thought about my own moment when I first dropped the F-bomb in front of my mother when I was 10 years old. My mother's reaction was to yell and scold me verbally for using the word. That made me fearful of using the word at home but surely did not stop me from using the word at school with my friends around. In fact, it encouraged me to use it even more outside of the home. There was a time between when I was 10 and 18 where I probably dropped the F-bomb many thousands of times. But something around the time when I finished high school made me realize that I was really using the F-bomb much-too-much and since then I've used it quite sparingly, opting for other less incendiary words to express my own frustrations.

I doubt my son, all of 7 years old, will have that same sort of enlightenment any time soon but I do wonder if he'll end up using the word more now that I've told him it is not appropriate to use. Ultimately, it is a word and really I think the lesson to teach my son is that the word is fraught with meaning and emotions which often make it a word best used, if at all, sparingly.

As a father, the simple response is always to tell a child not to do or say something, but really does a child ever really listen to that warning? The way I see it, my responsibility doesn't end there. I have a duty to, at the very least, share the lessons I've learned with my children and to teach them the value and meaning of words, even if it is the F-bomb.
Posted by Nels at 9:47 AM No comments:

Quick plug to a thing I did for KQED yesterday. It's a "Perspective" on the Far East Movement and the song "Like a G6." It's about waiting our lives to experience this moment to see Asian folks on the charts but being too damn old to appreciate it fully. :)

On a side note, it's inspiring how our kids will grow up in a time when it's completely normal to have a black president and to see Asian folks on the top of the charts. It definitely wasn't like this during my youth, let alone five years ago.

Speaking of, an old family friend phoned my mom after hearing it. I haven't heard from the friend in like 35 years! Take that new media!

UPDATE: The Original Rice Don Dada and homey Poppa Large weighs in on FM at the LA Times.

SD
Posted by Soccer Dad at 4:26 PM No comments: