Listening to Rosanne Cash speak at the Times Center got me thinking about what “The List” I give my children would look like? What kind of intellectual/cultural legacy will I leave for them? What legacy will I be able to forge for them?

My father and I do not talk about music though we have argued politics.

Rosanne says this on her blog about The List:

The songs were culled from a List of "100 Essential Country Songs" that my dad made for me when I was 18 years old. It could have easily been called "100 Essential AMERICAN Songs", as the list covered every critical juncture in Roots music, from early Folk songs, protest songs, history songs, Appalachian, Southern blues and Delta bottomland songs, to Gospel and modern Country music. This list is not only a personal legacy, but I have come to realize it is also a cultural legacy, as important to who we are as Americans as the Civil War, or the Rocky Mountains.

Determined by time and place, my “America” is different than Rosanne’s. In 1973 when she was 18 and her father presented her with his list of “essential songs,” I was still in the single digits (born 12 years later but a day earlier). By the time I turned 18, the synthesizer and scratching had become as mainstream as the guitar and the fiddle.

And of course ethnicity plays a role. The word “country” has additional implications for me and my children (though we are all American born). A list of influential (if not essential) American songs for my children would have to include Jacky Cheung, Leslie, Faye Wong, and Andy Lau. These Cantopop singers made it far enough across the language barrier to reach me without Youtube or MP3 file-sharing.

They were influential partially because they represented a “modernizing” of what I perceived as Hong Kong music (which seemed overly preoccupied with ballads and overly “artificial” sounding synthesizers like the sound bites to 80s video games). These singers seemed to have a deeper understanding of the art of the English pop song and successfully bridged the aural sensibilities of both languages (English and Cantonese).

As a Second Generation ABC (American Born Chinese) I have a faulty grasp of Cantonese (my parents’ language). As Third Generation ABCs my children have no understanding at all of my parents’ (their grandparents) language. Everyone speaks English! (which is good in the respect that we have assimilated well but difficult in terms of a cultural legacy.)

I have written about the importance of my children learning Chinese. After reading about The List, I feel it is important that my children also have an understanding of the culture (art, music, and literature) that enriches their heritage as Asian Americans (or more specifically Chinese Americans).

(Digging around Youtube, Leslie Cheung’s Monica brought back memories. I couldn’t resist closing with it… ) 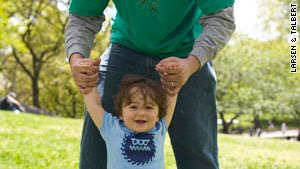 I caught this article linked by the fine people of BicoastalBitchin.

Alls I gotta say is that the writer hit the nail right flat on the head. This was my favorite sentence:

When baby makes three, the abrupt lifestyle change spells an end to these spontaneous expeditions.

Age three is the magic number, and it's a dad thing, almost exclusively. Wives and women are cool checking with the singles, adjusting to the schedule, embarking on the same activities. But for guys, the party begins to end when the baby first comes, as you get used to changing diapers, feeding the baby, putting the baby to sleep, etc. The party completely ends at 3. You're no longer the same person. Dude, meet yourself.

Sure, I still go out for fight night when Lyoto, BJ, or Anderson is fighting. Sure, I'm still down for chugging a beer at happy hour. But the nature of the outings is different. You're now a dad, and that comes before everything else. You have very little time for anything else.

The author says at the end of the article that he's beginning to have more time now that the kids are playing among themselves. He no longer gets the "dagger eyes" when he leaves the house. I'm looking forward to that time. I've been a different person for about four years now, and my littlest one is just 14 months, which means that I probably have another 22 months to go. Maybe I can once again re-enter the world of men.