What's up with Preschool

After having a second child, we didn't feel right having the grandmothers taking care of a newborn and a 3 year old, so we've been shopping preschools. As much as we are proud of never returning to the nest after college, we realize we're still dependent on them for free childcare. Even so, we don't want to put our sixty year old mothers, during their "retirement" chasing around a hyper three year old while heating breast milk and soothing our infant, no matter how adorable she is.

We've official been to about half of the preschool facility within five miles of our jobs and our home. I think we've made a decision. Some are affliated with universities; some are very commercial national programs, and we've seen a range that deemed themselves "Montessori." Some places require potty training which is makes my wife and I share knowing glances like we got a secret venereal disease as we mentally run through yesterday's potty accidents.

We even looked into having our son put into a special education preschool class with one of our friends' kids even though he doesn't have special needs which looked promising but it wouldn't work out with the scheduling. Because I need to be at work around 7 am, that has automatically eliminated ninety percent of places that do not start that early. We are looking for a slow transition, beginning my son with a half-day, three-day a week schedule. It seemed for many schools, nothing much happened after lunch and nap other than more of the same. Knowing my son and as a teacher, I wonder what huge blocks of "circle time" or "structured play" looks like given his limited attention span.

As an English teacher, I have to admit I'm partial to literacy practice and exposure. I know that developmentally he won't be ready for certain things and I don't want a stigma from pushing him too fast too early but I don't think some academic curriculum, a little writing, some phonemic awareness and reading circle, is going too fast during a 6 hour day. I'm skeptical of completely "play-based" education -- trust me my son is all about playing. Social interaction with other children will also be a big plus since outside of the occassional play date, his only regular interaction is limited to adults.

One thing I can't help but noticing is that at all the preschools--the students are almost entirely white and east Asian. That is definitely not the case at the public schools where I teach which are at least 50% Latino. This is not true of my city in diverse Southern California which has significant populations of African Americans, Latinos, and even Pacific Islanders. I know the cost of preschool can be prohibitive but as a teacher, its not like I'm raking it in and I can afford it. I know the value of utilizing extended family and I know an independent daycare or childcare provider can be much cheaper but is there a true cultural difference? Are there more stay at home mothers? Where do black and brown kids go when both their parents work?
Posted by Mr. Maestro at 8:42 AM 3 comments: 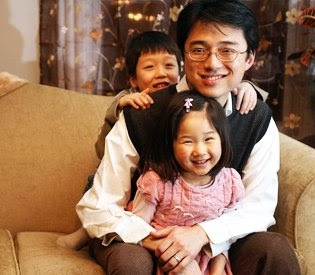 I had the opportunity to talk to Sam Yoon today, who is running for mayor of Boston. Hear my podcast here (and read my other reasons for supporting him). It's a fascinating podcast, and I think there is a lot to learn from his experience, even if you're on the other side. Most of us are not from Boston, but we can still support him financially, and we can still inform all of our networks.

Hey, he's also a fellow Rice Daddy. Listen to the entire podcast. He talks about his role as a son and as a parent, and he's doing the right thing by taking the lead. If you're interested in helping, spread word on your Facebook and with your network, and/or visit Sagar's donation page here.
Posted by bigWOWO at 12:13 AM 2 comments: