The Pursuit of Parenting

Recently, I suffered my children’s fierce complaints about having to go to Chinese school over the summer. All of their other friends had the time to themselves – they travelled and played and filled scrapbooks (or hard drives) with tokens from their adventures. My kids were frustrated that they were spending the summer sitting at a school desk for four hours a day, writing and reciting passages they have yet to gain a strong understanding of.

I looked towards my mother, who simply sat there witnessing my children’s tirade, and I knew - I knew I was doing a good job parenting. I knew this because a smile was tucked snugly in the corner of her mouth. It was a smile that dared me to remember how much I protested Chinese school when I was as young as my children are today.

In her New York Magazine article, Jennifer Senior explores the notion that parents are generally unhappier than nonparents. But “happiness” is such a loaded term. Its meaning is personal – individual – even within couples (children or not). When it comes to determining happiness, the ideal differs from mother to father, from child to child.

Throughout her article, “All Joy and No Fun,” there are examples of disciplinary issues straining domestic calm. And there are parents wishing to do the things they used to before the children. The latter is best explained here:

“And my hypothesis about why this is, in both cases, is the same,” says Twenge. “They become parents later in life. There’s a loss of freedom, a loss of autonomy. It’s totally different from going from your parents’ house to immediately having a baby. Now you know what you’re giving up.” (Or, as a fellow psychologist told Gilbert when he finally got around to having a child: “They’re a huge source of joy, but they turn every other source of joy to shit.”)

Disciplining is the hardest chore involved in parenting. It’s much more than just having your kids do as you say. It’s making sure they don’t hurt themselves or anyone around them and it’s providing them with a strong moral foundation.

As I read the Jennifer’s account of trying to discipline her son and her description of the mother in UCLA video, I couldn’t stop thinking: “Yeah I remember when my child did that.” I wondered how the situation might have differed with the fathers making the demands?

I don’t know what it is – call it primordial instinct – something programmed into the genes – but there is a difference between how children – especially sons - relate to fathers and how they relate to mothers. Jason Sperber from Rice Daddies joined two other fathers on NPR to discuss their relationship with their children and their perspectives on Jennifer’s article.

I also imagined how that scenario would have played out at my house with my parents. I don’t think I would have just gotten a time out for throwing something at my mother. I grew up the only son in a middle class immigrant Chinese household. How would Jennifer’s parents have reacted if she had done the same when she was a child? The parents of the woman in the video? When you are parenting do you tell yourself: This is what mommy and baba would have done?

I heartily disagree with the UrbanBaby mothers who say since their children their lives were no longer interesting. Post-children, my life is as interesting as ever. When I do see friends there is no lack of conversation – especially in the age of Facebook and Twitter – the iPhone - information is convenient and keeping in touch easier.

It certainly isn’t the disconnectedness our parents might have felt when they had us. My parents left the comfort of an entire network of family and friends to come to the US.

I won the Chinese school battle with my parents but am steadfast my children will not suffer the same misfortune. My joy then at winning the right to stay home on Sunday’s left me illiterate in my parents’ native tongue and tethered my career potential. With my children being even further removed from their ethnic roots than me, I am even more adamant about their learning Chinese. There is a library’s worth of stories and family histories lost to me because of my illiteracy. My children will not suffer the same handicap.

Jennifer Senior ends her article with a sigh - maybe a resolve -

It’s a lovely magic trick of the memory, this gilding of hard times. Perhaps it’s just the necessary alchemy we need to keep the species going. But for parents, this sleight of the mind and spell on the heart is the very definition of enchantment.

She is referring to a conversation she had with psychologist, Tom Gilovich, where he recalls watching cartoons at 3AM with his kids when they were sick. It was terrible at the time but now so far removed he is nostalgic about it.

Happiness doesn’t come right off the rack. You have to chose and tailor. Sometimes it means not doing the things you used to do to be happy – sometimes it means dealing with the sad until you can replace that happy thing with something new (or tailor it to look like new).

They do call it the “pursuit of happiness.” “Pursuit” is a verb – it is active. Happiness might bump into you sitting there feeling sorry for yourself or you can be proactive and chase it. Jennifer is right. It is “slight of mind” – but to get really good at it you need to practice – which memories are you going to cling to and treasure? Which will you forget?

Posted by Unknown at 3:58 AM No comments:

MADE IN THE USA ONLY

Hilarious (and fascinating) article from today's L.A. Times about the challenges of bearing gifts back to China. I guess the mini-Hershey's chocolates of my youth in the '80s don't cut it anymore.

Funny, I was writing in response to a new post on the site but by the time I finished tapping out my comments, the OG post was removed. In respect to the privacy of the original poster, I'll just paraphrase the part I was responding to: "to what extent should we push our kids to learn things that they may not enjoy?" The OP was talking about Chinese school, a grand tradition that many an ABC can probably relate to. Here's what I wrote in response:

I went to Chinese school for several years as a kid. I retained practically nothing out of the experience and while I won't say it was a waste for time, I do think that trying to master a second language that you're not immersed in at home is extremely difficult, especially if not done at the inception of language in a child's life.

The thing is: my parents made a very conscious choice to raise my sister and I in an English-speaking household; they wanted to see us succeed educationally and to them, that meant mastering English. In hindsight, one can question the logic of their decision; my mother's older sister raised her son (my cousin) in a Chinese-speaking household and as a result, he's very proficient in both English and Mandarin. But I rarely felt like I missed out. I have skill sets other people don't have as a consequence of my education just as I lack some skills that I might have acquired if my life had gone differently.

Do I wish I spoke better Mandarin? Absolutely, especially the times where I'm visiting China. But I don't put that on my parents' decisions. I could have taken Mandarin in college. I could take it now. But just as my parents made their choices, I've made mine too and that's been to accept that, at least right now, learning Mandarin isn't enough of a priority compared to other things I'd rather spend my time on (and in any case, if I was really going to go to language classes, I'd take Spanish first).

All of this is to say: it's complicated. My daughter (5) has her first piano recital today and she's very nervous about it. The pain of her anxiety pains me but I'm glad she's taking piano. I wish I had stayed with my lessons more as a kid but like Chinese school, my lack of progress and general antipathy eventually lead my parents to accept my decision to stop doing it.

Do I wish my parents had insisted otherwise? That's very hard to say. On the one hand, I wish *now* that I had better musical skills. But I can't say, "I wish my parents had forced me to learn." That would have created tension in our relationship by forcing them to force me to practice. Would that tension and resentment have been worth it in the end? Possibly. Possibly not. The old taunt, "you're going to thank me for this one day!" doesn't always get proven right. Sometimes, decades later, people are resentful about what they're forced to learn. That's the risk.

My wife and I talk about this a lot: is it our responsibility to pick what skills we think our daughter should master? Obviously some - how to read and write, how to swim, how to get along with others - have practical social and literal survival skills. But playing piano, learning another language, learning how to draw, etc. - those aren't essential (not to us). I think our current philosophy is to support what she wants to learn but not necessarily pick those paths for her. We wonder, all the time, if that's the best thing for her but like I said, we all make our decisions and have to learn to live with them. As the cliche goes, only time will tell if our choices were the "right" ones.
Posted by O.W. at 8:55 AM 1 comment: 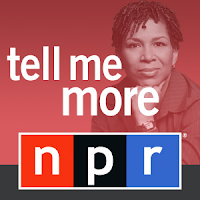 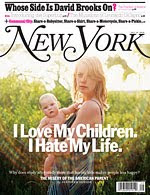 You've no doubt read the flurry of reactions that followed writer Jennifer Senior's New York Magazine cover story earlier this month, "All Joy and No Fun: Why Parents Hate Parenting." Last week, NPR's Tell Me More with Michel Martin devoted its regular parenting segment, "Mocha Moms," to discussing the article.
Today, I joined Keith Morton of African American Dad (who I had the pleasure of speaking with in 2008 and 2009 on Tell Me More's pre-Father's Day roundtables), Paul Fidalgo of Bloc Raisonneur, New York Magazine writer Jennifer Senior, and host Michel Martin to lend a dad's perspective on the issue.
I think it was a pretty good discussion, and would love to hear your opinions here. (Oh, and this was my 1-and-a-half-year-old's NPR debut! LOL--didn't realized she'd be that loud!)
Posted by daddy in a strange land at 1:35 PM 3 comments: