A fight to keep the language alive! 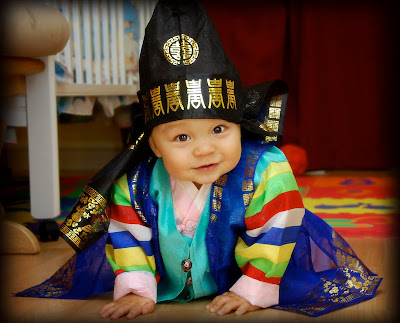 I was born in Korea, but moved to Canada with my family when I was almost 3 years old. I'm sure when my parents made the decision to immigrate they didn't foresee the ramifications of dropping a child who's never been exposed to English into such a foreign environment. I can tell you with much certainty that they didn't have the same concerns that I have as a parent today. Instead of worrying about whether the child would adapt and learn English, I find myself worrying about the opposite: whether my son will ever learn Korean.

Perhaps, it was more advantageous for me to learn Korean first. From what my parents have told me, I had a pretty good grasp of the language at an early age. Since I didn't enter the formal school system for a few years after moving to Canada, spoken Korean was further reinforced during that time. Although I do remember watching shows like "Sesame Street" and "Electric Company", there was no where near the amount of media available when I was the age my son is now. Today, my son is bombarded with cable television, internet, DVDs, and print media. The available outlets for programming is limitless, ubiquitous, and brought to you in high definition! It's no doubt that a child would be highly affected.

I grew up in the era where English as a Second Language (ESL) classes were in their infancy and not readily available in all schools. I didn't have to be part of the groups of kids that were separated from the rest of the general school population, (makes elementary school sound like prison). I guess I was lucky because I was young and able to pick up English quickly. In Kindergarten my teacher mentioned to my parents that I was adjusting just fine and yammering away like all the rest of the kids.

Like many of my school mates who spoke other languages, I truly did lead a bilingual life where one language was spoken at home and English everywhere else. I don't remember exactly how I was able to maintain fluency in both languages, but I managed to do it. From what I hear, this is not always the case with kids in the same situation. I know many children who immigrate simply abandon their first language perhaps in the aim to fit in faster and become more successful in school.

Now my son is almost the same age as I was when we immigrated to Canada. As he grows and develops, I try to show him things that are distinctly Korean. I try my best to expose him to language, food, and cultural differences; however, at times I feel like I'm losing the battle. Like a typical toddler he is specifically finicky about trying new foods and good luck getting him to taste something he doesn't recognize.

It's a difficult and frustrating process, because as a parent you want your children to thrive, learn and develop. My wife and I put a lot of effort into trying to give him a good foundation. A little after his first birthday he began using sign language to communicate basic thoughts and wants. It was exciting to see him ask for for objects, food, milk, cookies, etc. At that time I also tried to lay the Korean foundation, but I saw myself gradually gravitating towards English, since the payoff was much greater.

Although, my son does understand some Korean words and explicitly refers to some objects/nouns in Korean only 간장 (soy sauce) , 만두 (mandu) to name a couple, I think that the English world has got such an upper hand it's overwhelming to fight against. I am the only person who he sees on a regular basis that speaks Korean to him at all. Lately when I speak Korean to him he says: "No thank you Daddy, I'm not going to say it", which breaks my heart a little. I recently took him to visit my aunt (who cannot speak English at all) and while I was doing some work at her house, he chose to hide in the closet (where I was working) instead of trying to interact with her. He was definitely overwhelmed by the fact that he couldn't understand what she was saying and vice versa. Maybe I'm worrying about it prematurely, he'll have ample opportunities to learn a second language later, but I had grandiose visions of he and I sharing a laugh together in something other than English. I guess I'll have to postpone that vision until later. 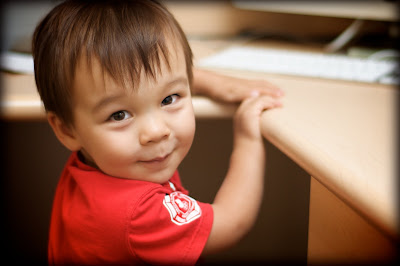 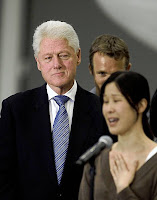 Like millions around the world, I was ecstatic to see Euna Lee and Laura Ling step off the plane today, safe again after confinement in North Korea. As a journalist (former, I suppose) and parent of a 4-year old, the sight of Euna and Hana reuniting also touched me deeply.

But, is it wrong for me to feel a bit off that it took a white dude to pull off the deal? How many times have we seen this happen in movies where the Asian female is "saved" by the dashing white dude? Not mad at Bubba at all, he did the damn thing. BC gets a lifetime honorary AZN pass.

Just wondering if flashbacks of "Come See the Paradise" were ringing for anyone else...

Every night I pray to the moon,

That I will see you again in this life.

I became a father before I became interested in adoption.

When I was younger, the word was thrown around like crumpled newspaper in the breeze snagging against fences and street signs. When I was a teenager, I found word buried beneath my middle name. It was always there, but never spoken. It sat there like the pause on people’s breaths after hearing my last name that doesn’t sound Asian. When I was older, it became the cud of conversation: a badge of my disposition that I wore on my sleeve.

Yet, it wasn’t until I was a father that my true search for self began.

Nothing can prepare you for the ties of blood. The reflection of myself in my daughter’s form made me realize that she was the first person I could touch who was related to me by blood. I couldn’t recall my omoni’s caresss, imonim’s chest, or halmoni’s scent. It was this girl, who slept by my chest, on my chest, burrowed in my chest that intoxicated me with the breath of ancestry.

I took on an earnest passion for genealogy, tracing the lines of my not-Asian last name to the deep forests of a different continent. But, I failed to see the irony in tracking my adoptive parent’s past to , , and . And so, it was my daughter’s birth that sent me to my own new birth.

My first gossamer thread I cast was an email to my adoption agency. I believed it would take years for a lead. I was prompted by stories of others’ plight. I was seduced by the believability and safety that it wouldn’t happen.

Instead: a sonic boom. Within one week, a message was returned. Within weeks, my birth family desired more. Within months, a letter arrived from . Within the year, I was on a plane to . The journey hasn’t stopped since.

However, during this journey, my conviction towards adoption didn’t change. I was, and still am, in favor of adoption reform and adoptee rights. I believed that adoption was a necessary institution in particular situations, and downright evil in others. I believed in nuance and thoughts in shadows.

My perception of adoption is what changed. Before, the word was nothing more than a moniker for wealthy white couples buying orphaned children. The children themselves almost never had a story. Why should they? They were merely the players on the stage, and the leads were the white saviors. Having a daughter made me realize that adoption is all about the minor character. It’s all about the child, who never acts, but is acted upon. It isn’t Romeo and Juliet, it’s Mercutio and Tybalt. It’s Rosencrantz and Guildenstern.

At the same time, I could see my daughter’s childhood and be witness to memories. She might not remember everything that happened, but I could tell her when her own memory failed. This was the biggest change in my perception. That adoption wasn’t just about the players, but the story of loss and sorrow.

And so, adoption became a trail of forgotten words dangling in the rafters of my mind. It was shoe boxes of photographs, a neatly delivered silk-wrapped infant shoe that had been hidden in a drawer, and a list of names, dates, and fees that added up to the sum of me. Yet, it took nearly four years after my search began for the story to be unearthed and unloosed from the grip of my adoptive parents. It was their story for almost thirty years, and finally, it became mine.

Yet, staring at my daughter before I left for the first time, I realized the emotional effort required to let go of your own flesh and blood, or even a story that feels like your flesh and blood. It is an open wound that no doctor can mend or stitch closed. It continually tears and rips with every day, month, and year. There isn’t a scar because it’s never healed. It is the moon, torn from the Earth.

This was written as a column for an adoption magazine due out this month (I think).
Posted by Unknown at 8:31 PM 1 comment: