My friend Daniel and his daughter Olive on this CBS segment about a Boot Camp for New Dads in NYC!

Fatherhood Lesson #692: STFU and Be a Good Sport

Halloween's creeping up on us, and I'm dreading it.
I've always hated dressing up, and I've never had a sweet tooth. Ok, maybe there were one or two Halloweens when I was a kid when my friends and I would shaving cream rival gangs of pre-teen suburban sugar hounds, or go on midnight missions to t.p. houses, and maybe I really enjoyed those. But I really hate wearing masks because I hate how warm and moist your face gets, and I hate re-breathing my own CO2.
Truth is, I'm kind of a curmudgeon when it comes to holidays in general. I'll resist the temptation to rant and merely say that the tragedy of holidays in America is how commercial interests, public rhetoric, and local cultural practices all conspire to water down their most salient aspects, to the point that they become incoherent without their accompanying imagery.
Anyway. The point I want to make is that as a father of a six month-old who's about to attend his first Halloween party, I realize that I'm going to have to smother the curmudgeon and learn to be a good sport.
A GOOD f-cking SPORT.
I will have to show excitement for pumpkins and ghosts and green corpse fingers. I will have pretend to enjoy listening to the Ghost Busters theme song, Michael Jackson's "Thriller" (fine, I admit it, I hate that track), that creepy piece of organ music apocryphally attributed to Bach, and the "Monster Mash." I'll have to ask other kids what they're supposed to be and then act frightened or enchanted when they roar at me or blow fairy dust in my face. At some point I suppose I'll have to talk to some parents, and since it's the Bay Area they'll undoubtedly mention something about how they won't buy this or that candy, or how they watched that YouTube video by the UCSF professor about how sugar is toxic, and I'll have to grunt and groan and shake my head and look somewhat upset.
And, to top it all off, I'll have to wear some sort of costume, likely accompanied by some mask, and I'll have to put some effort into it -- because I certainly don't want to teach my son to half-ass anything.
"This is just the beginning," I hear you more experienced daddies thinking. Yeah, yeah... I get it.
But the other important issue that holidays bring up for the over-educated parent is the tension between conformity and knowledge. In other words, when he finally achieves full sentience and acquires language, I'll have to figure out a way to teach my son enough about the holidays that he doesn't just think that Thanksgiving is just about turkeys, Christmas just about presents, and Martin Luther King, Jr., just about some dude -- while also being sure to teach him how to enjoy the holidays (even though I clearly don't) enough that he doesn't become a total social outcast and snob.
I'm sure for most holidays I'm just going to have to default to the version in the Old Navy commercials, because it's just too difficult to arrange this kind of pedagogy for everything. But maybe I'll comfort myself knowing that history and social justice in our household won't only be taught on special days of the year, or commended in regard to specific figures; that both will be inextricable from our daily life.
If we can manage that as a family, that'll definitely be something to celebrate.
Posted by Chris Fan at 11:52 PM 2 comments:

Actually, it's just a "transition" day: we drop him off in the morning, cry, leave for two hours, cry, come back and pick him up (and maybe cry some more). Tuesday, we do the same thing, but at the end of the day. His first full day is Thursday.

Therefore, in both a symbolic and concrete sense, today is the last day of a very special period in our family's history. I'm being a touch melodramatic, but add the fact that Amy's going back to work next week and maybe what I mean becomes a bit clearer.

Eliot's been exclusively under our care for the past six months. That's the amount of time Amy's taken off, and the time I've spent more or less ignoring work on my dissertation, because my mind is constantly with Eliot, Amy and the dogz (the Chen-Fan "Pack," as we like to say). It's been kind of a primal, protected period -- and we're so lucky we've had it. I don't really have any words to describe what, precisely, it's been.

The closest I can get is to say that, for the past six months, we've been existing exclusively for each other, with no other goal in mind other than to be with each other. It's an arrangement that the exigencies of middle-class life conspire against. Even if we have another child, the equivalent period won't -- can't -- be the same.

Daycare is Eliot's first official step in his own direction. Even though tomorrow is, strictly speaking, just a baby step, it's the first movement that'll have been taken away from our protected arrangement. "He's his own person," I tell people, "whether we like it or not."

What's so cutting is that I know full well and don't know at all what I mean by that.
Posted by Chris Fan at 11:55 PM 3 comments:

Got an Engaged Father Fistbump (EFF) this morning.
I can typically be found escorting our two Taiwanese Mountain Dogs (Agatha: black; Bao Bao: brown) around the neighborhood at about 8:30 every weekday morning, with Eliot strapped snugly to my chest.
There's a Whole Foods on the walk, and, today, when I rounded the corner leading up to it an unencumbered, faster-moving dude came alongside to pass our slower-moving pack.
"Looks like you've got the whole family there," he said briskly.
I get this a lot, so I shot back my canned response: "Gotta let the wife sleep."
He chuckled then came in a little closer.
"Yeah, I've got two. You know, a lot of guys don't really know what their wives go through."
As he said this, he scanned my face forensically, searching for the stigmata that would reveal my membership in the Brotherhood of Engaged Fathers.
Our eyes met and we knew instantly.
Posted by Chris Fan at 10:24 PM No comments:

Howdy folks. I'm a new edition to the blog, so I wanted to introduce myself.
My name's Chris Fan, and I'm the proud father of a 5 1/2 month-old boy named Eliot. When I'm not making excuses to stay at home and play with him, I'm working on my dissertation in the English department at UC Berkeley. My wife's a legal aid attorney in Oakland, where we live. We also have two Taiwanese Mountain Dogs. One's named Agatha, and the other is Bao Bao (寶寶). She's shy but dominant; he's still figuring out his place in the world.
I was invited to contribute to the blog because of an article I wrote for the Hyphen Magazine blog called "On Engaged Fatherhood." It was mostly a rambling bit about how engaged fathers aren't the norm, and the double standards for fathers and mothers, but the main point was to send some love in the direction of a Kickstarter project called Oh Oh, Baby Boy! -- a children's book by Oakland artist Janine Macbeth that celebrates "engaged" fatherhood. (There's still about 48 hours left in her campaign! Please donate and get your copy of the book!)
Anyway, that's probably enough of an intro. I've been following this blog since Eliot was born, so I'm totally stoked to be a contributor now, along with all these other amazing dads!
Ok, now for a shameless photo of Eliot. 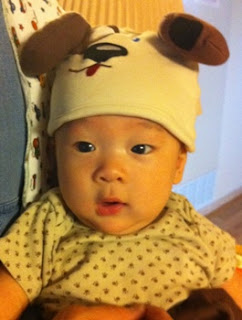 Long-time readers of RiceDaddies might know that we got a Subaru Outback not long after our little Sunshine was born. As with most other car brands, we get a free subscription to their monthly car magazine (Subaru Drive). This month's issue mentions a TV commercial called "Sweet Tomorrow" that Subaru is running in key Asian-American markets. The ad "tells the story of a young Chinese couple balancing tradition with their Chinese-American lifestyle."
The commercial is produced in Cantonese, Mandarin and English. But upon watching the English version, there is nothing to suggest any kind of cultural balancing act. While the husband does visit an Asian supermarket, the couple could have been any combination of white, black, Asian or Latino. I guess that's a function of this commercial's intended versatility. In English, the couple is as American as apple pie. In Cantonese or Mandarin, the couple is Chinese.
Posted by SoulSnax at 7:16 PM 2 comments: