The Default Human Being 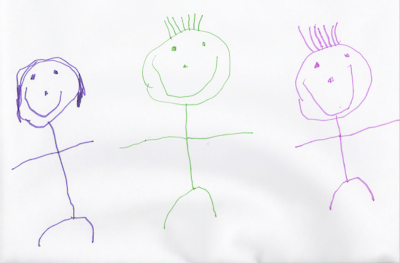 Answer this question quickly--what race are the people in the picture above?

What are their defining characteristics, what color is their skin, how are their eyes and lips shaped? Can you tell what race they are?

If you answered White, you're wrong. If you answered Asian, then answer the next question: who are these people? Actually, that question might be too hard, so I'll give you the answer: from left to right, it's my daughter the Pod, me, and my son Gun-Gun. (Gun drew this for me yesterday.)

This question of What Race is that Cartoon comes from this cool blog post that King found: Why do the Japanese draw themselves as White? It's hilarious but true. When Japanese people draw this: 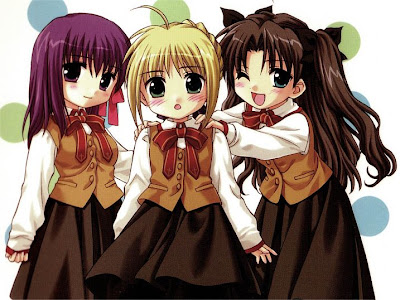 ...Americans see White characters, while Japanese people see Japanese characters. As Abagond points out with great perspicuity, it's because in America, the "Default Human Being" is White, while in Japan, the default is Japanese. Sure, the Japanese anime characters above have big eyes, but do White people really have eyes that big? And Abagond is right about skin--some Asian people are as light or lighter than White people. When I first went to Japan, I too thought that the anime characters looked White. But after a while, I began to see them as Japanese people see them.

If I draw a stick figure, most Americans will assume that it is a white man. Because to them that is the Default Human Being. For them to think it is a woman I have to add a dress or long hair; for Asian, I have to add slanted eyes; for black, I add kinky hair or brown skin. Etc.

He also talks about Marge Simpson, who has yellow skin and a big blue Afro, but whom people still assume is White. Absent any stereotypical feature--slanted eyes for Asian, black skin for black, turban for a Sikh--people in America assume Whiteness. White men are the only people who don't have to have a racially stereotypical identifying characteristic in order to be viewed as White.

It's a very interesting observation because I find that under most circumstances, I too assume Whiteness. My son watches a Nick Jr. show called the Backyardigans, and even though the characters are all animals, I think that post-anthropomorphism at least some of the characters are supposed to be African American. 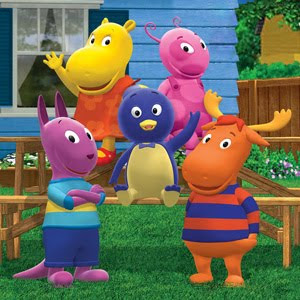 After all, their names are Tyrone, Uniqua, Tasha, Austin, and Pablo--with the exception of Austin, their names all sound minority. The creator of the Backyardigans is an African American woman named Janice Burgess. But we (including me) are so used to assuming Whiteness that we experience cognitive dissonance when we see non-White people portrayed with non-stereotypical physical characteristics or non-stereotypical normal experiences.

I've been reading lots of literature recently and thinking about White writers vs. Minority writers. Readers usually adopt their notion of the Default Human Being and use that model unless the writer specifically brings up the race of the character or has the character doing stereotypical minority things. It's a hard dichotomy to manage, I think, because minority experiences are similar to non-minority experiences, yet there are also unique situations that come from being a minority in a majority culture. We don't want to be Whitewashed, yet we also don't want our experiences to be ignored.

So while I think it's good for us to play both inside and outside society's idea of the default human being, I think that ultimately we want to get away from it.

Maybe things will be different for the next generation. Gun-Gun used to watch a show called Sid the Science Kid. Sid looked racially ambiguous to me at first sight, and when I watched further, I learned (I think) that he is the product of a Black woman marrying a White guy. 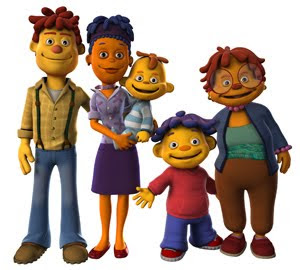 Perhaps through exposure to more diversity in the media our kids will more open to understanding people of different ethnicities without having a Default Human Being concept based on race.

Father’s Day always makes me think of that Harry Chapin song, “Cat’s in the Cradle” – More so now that the kids are getting noticeably older.

As the kids get older, I get older, so maybe it is just me getting old and sentimental but Chapin’s Cradle seems to have more resonance now. It’s like a friend once told me about reading Hesse’s Steppenwolf. He said it was a totally different book read at 30 than it was read at 20.

I joke with friends that I am still my children’s hero and that I want to milk it for all its worth. One day I’ll find myself clumsy and out of step with my children – unable to understand their language or appreciate their logic. Where once my children were proud and hungry for my attention, they’ll let their voicemail pick up and find me meddlesome. But until then I want to spend every moment I can with them. I want to see them grow despite knowing that one day they’ll grow out of me.

That said – there are those “other moments.”

It is not a secret that if you told me ten years ago that I would be the father of two today, I would have simply have dismissed the comment. A decade ago, children were not part of my life’s plan. However, as a friend put it once about her own children (I’m paraphrasing and taking some poetic license but her sincerity and the truthfulness of the statement remain unchanged): Before kids it was hard to imagine life with them, now (with kids) it is hard to imagine life without them.

Like the father in Chapin’s song, my father and grandfather worked long hours to afford me the luxury of “teaching my children how to throw.” I don’t remember if I wanted to be like my father though I do remember (regretfully) hating my father. There was a lot of going on then and my father represented yet another entanglement I believed was keeping me from soaring towards my goals. I realize now that he was just trying to keep me from falling over the edge of this flat earth.

As an adult, my sister once told me that my father “does not understand me.” The comment took me aback. It had never occurred to me that he “didn’t understand me.” I just thought we disagreed. I mean he and I are peers now, right? We are both adults. We are both fathers.

Sadly, at some point in time I am certain my children and I will not understand each other. I am hopeful we’ll get over it like my father and I did (at least we’ve become better at feigning a shared perception).

I don’t encourage my children to “grow up just like me.” I want them to be better – just like my father wanted for me. So maybe someday my children will hate me for wanting so much but hopefully someday they will forgive me as such.

Posted by Unknown at 7:48 PM No comments: