Once a year I indulge myself (and my kids) in spandex and uwangis at the annual New York Comic Con (NYCC). It’s a fun distraction for me to consider the longevity of some of my favorite heroes and learn about new ones. If I had to pick a single highlight from this year’s NYCC, it would have to be Marvel’s Superhero Squad.

In addition to the usual video game offerings (new Spiderman and X-Men games and new Captain America and Thor games), Spring 2011 will mark the beta test of Marvel’s first MMO: Superhero Squad Online. My kids and I had a chance to play the beta at this year’s NYCC.

Choosing to target a younger audience for its first MMO is an admirable choice. There are unique challenges to producing an online experience for younger audiences. There are issues of safety, age appropriate content and situations that you do not have with a teenage audience. There are also issues of engagement outside of the immediate action. Is the objective of the play engaging enough to maintain the desire to play? What a teenager values can be vastly different from what a 12 year old or 6 year old values.

The Superhero Squad MMO follows the traditional objectives of collecting ”things” - coins and objects and team members - with the added dimension of being interactive. While the play may be single player, we all participate in the experience like raging fans or backseat drivers. We root each other on and shout out directions and choices at each other. The experience is sometimes frustrating for my youngest because he has not developed the hand-eye coordination or the coordination to work multiple buttons.

From what I saw, where the Superhero Squad MMO succeeds is its simplification of physical play for the younger members in its primary target audience (boy ages 6 –12). My youngest had none of the frustration he usually does playing a videogame. As an educator, I see plenty of opportunities to enhance the learning in the Superhero Squad MMO and am curious to see if the development team at Gazillion pursues them.

One of the points the Superhero Squad Gazillion panel made consistently was the environment of the MMO provided great potential and flexibility for growth. The educator in me wonders if the growth includes increasing complexity in the physical play as players traverse to higher levels? The educator in me also wonders if the cognitive complexity of the play will also increase as players move up levels?

The parent in me wonders if the storyline for the game play will address the real world social challenges of being pre-teen like the current epidemic of bullying? I wrote more about Marvel’s MMO and the NYCC at Cranial Gunk. Click Here to read it.

Posted by Unknown at 3:56 AM No comments:

Last week on WNYC, there was this very cute story by Rookie Reporter Helen Peng, on her observations of the differences and occasional conflicts between ABCs (American Born Chinese) and FOBs (Fresh Off the Boat). I'm not Chinese, nor have I had the chance to check out Flushing, so I was surprised to learn about the differences between the various waves of immigration within the Chinese-American community.
Posted by SoulSnax at 10:00 PM 1 comment:

Bullies and technology and the meanness that is on the rise 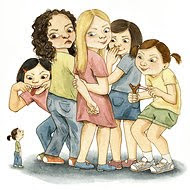 I saw this article in the Times today: The Playground Gets Even Tougher. It's about how kids are getting nastier and nastier at younger ages. Girls in particular can be very mean. In light of the Tyler Clementi incident and other suicides, the entire news media has been focusing intently on bullying and how to prevent it. With the power that comes from new technology--blogs, social networking, and cellphones--the bullying issue is only getting worse. Little kids are learning to hate themselves when victimized by bullies. And what's worse, as mentioned in the article, is that many parents encourage this kind of behavior. I think this statement is probably accurate:

“The girls who are the victims tend to be raised by parents who encourage them to be more age appropriate,” Ms. Rosenman said. “The mean girls are 8 but want to be 14, and their parents play along. They all want to be top dog.” And so the nastiness begins.

When and how does this end?
Posted by bigWOWO at 9:29 AM 3 comments:

Email ThisBlogThis!Share to TwitterShare to FacebookShare to Pinterest
Labels: bullies

HOLY CRAP, would you believe that it's been almost TWO YEARS since we added some new proposals to the RiceDaddies Empowerment in Diversity Challenge? Since that time, all of our educational proposals have either been fully funded, or have expired.
I'm not even gonna try to make up any excuses for why I dropped the ball on this. Anyway, this morning ThisisLarry finally gave me the kick in the butt needed to update our Challenge.
The following two proposals are currently in need of funding:
Help Us Learn About The World's Cultures Through Art! (Asia)
- New York, NY - Grades 6-8 - Poverty Data Unavailable -
"The resources requested include books and art supplies that are to aid us in our exploration of ASIA. Our first assignment is going to be to read the book A Thousand Paper Cranes, and try to make just that to display in our school."
---
Peacebuilding in Middle School - Race to Understand Race
- Ventura, California - Grades 6-8 - Poverty Moderate -
"I am requesting 35 copies of the graphic novel "American Born Chinese." By reading this fun, high interest novel, students will have opportunities to explore how it feels to be seen as different. Students learn to empathize with others and they will have opportunities to explore how they see themselves, as well."
---
Launched in June 2007, the RiceDaddies Empowerment in Diversity Challenge aims to mitigate the marginalizing effects of diversity-negligent pop culture and media by funding innovative educational programs that do the following:
Tweet

Update: Rice Daddies rule!  Less than 5 hours after this post went out, the project is funded -that's like $20 an hour!  Take THAT Malcolm Gladwell!

Hey Rice Daddies, excuse the intrusion, its just Thisislarry rising from limbo.  I was on Donorschoose.org and came across this funding project from Ms H. at a high-poverty school in NYC:

"My Project: I am asking for a set of Gene Luen Yang's fantastic graphic novel American Born Chinese to complement our year long study of outsiders and fitting in. We are also reading The Outsiders, House on Mango Street, Romeo and Juliet and Enders' Game. This novel would fit in wonderfully with the them, as well as introduce students to graphic novels. I would weave in elements of the theme and encourage students to see the connection between pictures and words. Students will be asked to compose their own graphic story upon completion of the novel."

I personally loved ABC, and so does my son, another ABC.  I think it would be awesome to put this story in front of more kids, and I'm supporting this project on Donorschoose.

Ms H's class is less than $100 away from their goal, can we help them get there?

OK, back to limbo, peace out!
Posted by thisislarry at 8:40 AM No comments: