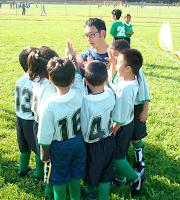 I made it official. I now put the "ass" in Assistant Coach for a bunch of U-6ers one of which is my son Maceo, now 4.

The team is composed of mostly first-time soccer players mixed in with a couple of 5-year old ringers. At the other end of the spectrum there are the oblivious ones, who I like to call "daisy pickers," that I try to point in the general direction of the goal. The head coach is the father of one of Maceo's classmates and a fellow soccer fanatic so we get along well. Practices are a mix of stretching, FUNdamentals, and scrimmage. We understand the main thing is for kids to exercise, learn teamwork, and be good sports. And pass! Pass!

It's been more fulfilling that I originally expected it to be. I was admittedly reluctant at the task of corralling a bunch of 4-5 year olds and teaching them the game I love but it's good times. When they do something you tell them to and it pays off — like making a good defensive play or scoring — the kids break into a big smile and it melts you. I've laughed out loud during these moments. I also realize that scoring their first goal ever is a significant moment in their lives so I try to respect that.

1) The kids always ask: "Did we win?" and "What's the score?" My answer is always a frank "We're all winners" and "The score is FUN-to-FUN". I scoffed at the concept of "fun-to-fun" games as important lessons are learned from losing as well as winning but at age 4? Scoring is moot.

2) One of the coaches this weekend was this pressurized Korean dude who ran his charges like a confused drill instructor. He'd position his kids all over the field for kickoffs and inbound play. I felt bad for the players because they're just learning the game and he's peppering them with questions like, "Why are you doing that?" He was going off on his son and the boy pushed him in the face. Wow. The parents on our team are a supportive lot, thankfully.

3) Before we start we do a roar and chant "Tigers!" and I do that rap show cliche where I feign disgust that they're "not loud enough" so they get fired up and yell louder. I think they're excited because it's the only time they're encouraged to roar and scream.

4) Maceo is a borderline daisy picker and it's secretly killing me. :)

Recently Turner Classic Movies played The Good Earth and The Bitter Tea of General Yen back to back. I caught the former as the locusts descended upon the crops and continued to the latter as a “Chinked up” Nils Asther rode away in “Yellow Face” without care or concern for the rickshaw driver his car had just hit.

I grimaced as I watched Nils Asther’s exaggerated Yellow Face – painfully narrowed eyes and pencil-thin eyebrows – look preoccupied and distant as a desperately concerned Barbara Stanwyck (playing blonde White Christian) tries to get him concerned about the rickshaw driver he just injured. I couldn’t watch any further than that despite telling myself I was being unfair – things were different then – Al Jolson – Black Face – It’s a Capra movie for Crissakes! You know - It’s a Wonderful Life!

I was ready to be offended. But then both movies were made in the 1930s when minstrel shows and Yellow Face went unquestioned. I accepted the caricatures and pacified myself with the excuses of time and place – It was the 1930s – pre-Civil Rights – pre-Dr. King – pre-Vincent Chin… I focused on the story – the drama unfolding.

And they were good stories. The former about a family coping with the challenges presented by nature (both earthly and human) and the other about the mutability of faith. With the latter I couldn’t stop myself wondering why it hadn’t already been remade with Chow Yun Fat and Charlize Theron or Simon Yam and – I don’t know – Gwyneth Paltrow? - But that’s not the point. The point is it is a good story that can be a great one with some modernizing and tweaking.

Perhaps the most poignant example of modern day Yellow Facing is the movie Gandhi. Gandhi because I watch it every time it is on – It is one of my favorite movies! Gandhi because he is my inspiration - I am awed by the resolve he showed in not hitting back and his perseverance through such hardships (first with the British and then with the religious divide between Hindus and Muslims).

Gandhi because he is played by Ben Kingsley in “Yellow Face” (or more appropriately “Brown Face”). But Kingsley plays so well and so convincingly I don’t see Ben Kingsley past the opening credits – I see – in some perverse rearrangement of time – Gandhi as I imagined he would be as the young lawyer being booted from a train in South Africa and years later as the frail looking robed defender with a walking stick.

In the Arthur Dong documentary, Hollywood Chinese, Luise Rainer’s (the actress who played O-Lan in The Good Earth), sentiment on authenticity is reiterated by Nancy Kwan and a few of the others interviewed: “It’s illusion… It’s much more important to be true to the character inside than to be exactly right on the outside.”

Racebending (the site that got me thinking about this again), was created to encourage “fair casting practices. As a far-reaching movement of consumers, students, parents, and professionals, we promote just and equal opportunities in the entertainment industry.” Its creation was sparked by M Night Shyamalan’s decision to cast only White actors as the protagonist leads in his adaptation of Nickelodeon’s cartoon series, Avatar.

He rationalizes his decision in an io9 interview:

Here's the thing. The great thing about anime is that it's ambiguous. The features of the characters are an intentional mix of all features. It's intended to be ambiguous. That is completely its point. So when we watch Katara, my oldest daughter is literally a photo double of Katara in the cartoon. So that means that Katara is Indian, correct? No that's just in our house. And her friends who watch it, they see themselves in it. And that's what's so beautiful about anime.

”So that means that Katara is Indian, correct? No that’s just in our house.”

And so I think that’s where the problem lies - “just in our house…” Why should we be Katara just in our houses? Why can’t Katara be Indian? Why does she have to be White? While I agree with Luise Rainer about the craft of acting and the art of making a good film, I think she and Shayamalan miss the point – It is about the opportunity to indulge in the illusion, not about the illusion itself. It is akin to Shyamalan telling his daughter: “Honey, that’s cute but you can’t wear the Katara costume outside like the other kids.”

Growing up as an only child definitely gave me my own unique perspective regarding family life. I remember the looks on people's faces when I told them I was an only child. They often remarked on how "spoiled" I probably was. In retrospect I guess I was spoiled, but definitely not to the point that I wasn't thankful and appreciative of what I had. My mother made sure of that. I did often wonder what it would have been like to have a brother or sister around.

It was a huge leap of faith for my wife and I to decide to have a second child. Our first foray into parenthood hasn't been a cake walk and the sleepless nights alone were almost reason enough for us to stop at one. The utter exhaustion that we experienced in the early weeks and months obviously had an effect on us. However after much discussion and debate and ultimately throwing caution to the winds, we were lucky enough to bring another wonderful life into this world. Thankfully we've been very fortunate as number two has been so much easier and compliant than our firstborn. Maybe you can chalk it up to experience or perhaps it's because we're a little more prepared and easygoing. Who am I kidding, it's mostly due to our daughter herself, have I mentioned how great she's been? I know many parents may hate us, but she was pretty much sleeping through the night by seven weeks. She'll even go days without really crying. Trust me, we thank our lucky stars every night. She's been amazing.

You hear stories and nightmares of sibling jealousy or behavioural issues associated with bringing a new baby into the house. For the most part our son has been indifferent, which is way more preferable than what we were told to expect. Lately, he's even been showing her more affection, odd considering he has never really been the cuddly type.

As parents, my wife and I try our best to lay a strong, nurturing foundation for our children. We strive to establish a stable, warm, and supportive home environment. We constantly stress and try to model the importance of manners and respect. No where is this more apparent than in the things that we tell our son. We try to convey the responsibility he now has as the big brother, to watch out for his sister, to teach her things, and to reinforce that the bond that they share is like no other. We want to be able to see them grow up together and be able to lean on each other in times of need; however, we also know that there are no guarantees. Although we want them to be best friends it may not necessarily turn out that way. So we're keeping our fingers crossed and our hopes high for the future. And if anyone has a magic formula as to how to foster such a relationship, we're all ears.
Posted by Obiwanhavanese at 9:39 PM 1 comment: