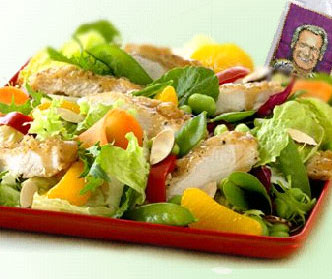 Took out to the Mick for a treat yesterday (it’s sad, but at 2.5 years old he already knows how to DEMAND Mickey Ds). As a result, I had my second McDonald’s Asian Salad, along with an order of Crispy Chicken Selects (with chipotle BBQ and ranch dressing!).

Now, I’d thought the Asian Salad was pretty good the first time, but it was actually better this time around, for whatever reason… even ate a big piece of the soy-ginger grilled chicken, rather than restricting himself to the deep-fry-licious Chicken Selects. And he scarfed all the mandarin orange wedges and carrot bits.he Chicken Selects were pretty great too. I hadn’t had them before—it was a coupon for discount Chicken Selects that played enabler for this Daddy and Son happy meal—and I’ve gotta say, they’re an order of magnitude better than McD’s highly suspicious McNuggets, or BK’s disgusting Chicken Fries and arid, tasteless Tenders.

I actually found myself, uh, Lovin’ It.

Crap, I’ve been borged. Still, it’s interesting that McDonalds is really starting to move into the lo-hi food space, with their Premium Coffee and Chicken and Salads--they're turning into, like, the Target of qwik-serv chains. The pricing is a couple bucks more than their standard artery-choking crap, but the quality of the fare is honestly better than a lot of sit-down places I’ve been to. And presumably, the meals are consistent to some 0.00001% tolerance, so you’re guaranteed a reasonably similar experience each time you go.

If they can expand their menu of healthy options, I predict good things ahead for Ronald and his pals. They'll still get the people who want to mainline saturated fats, but they'll also lure parents looking for fast, healthy meal for themselves and their picky young Mini-Mes.

Well, maybe not that healthy: H. had a bunch of fries and a chocolate milk jug with his grilled chicken and mandarin oranges. Sigh. Pobody's nerfect.

Posted by InstantYang at 1:37 PM 8 comments:

Happy Mother's Day, from the Rice Daddies to all our Rice Mamas! 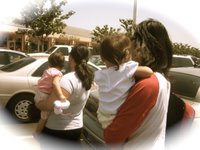 You're our lovers, our partners, our best friends, our spouses, our better halves, our wives. You're the mothers of our children, the best role models we could hope for for these tiny, fragile little lives we crazily thought we could bring into this world. Together, we're their parents, their protectors, the ones responsible for guiding them through this life, as our mothers and fathers did for us. And you know what? We wouldn't have it any other way.

For all you do and all you are, for everything we've thanked you for before and all the stuff we've accidentally forgotten, thank you. For us, every day is Mother's Day, and we love you.
Posted by daddy in a strange land at 12:01 AM 1 comment:

L is only 15 months old (yet already throwing tantrums...awesome!) but Sam and I are already starting to worry about school. Actually, maybe not Sam. I've been a small neurotic wreck since we're currently planning a move down to Southern California. Like many parents (I assume), apart from Craigslist, Westsiderentals.com and Google Maps, I've been using GreatSchools.Net as an informal real estate guide and frankly, it's driving me nuts.

Here's the thing. I never, ever want to end up like these parents. I know affluent NYC parents are a different kind of species from, well, everyone else. Seriously, how is it that there hasn't been a reality show yet where Upper East/West Side parents get to compete to see which of their 4 year olds will win a spot in some coveted private school. It seriously makes the upper middle class in New York seem bat-shit crazy. $5,000 - 10,000 for Mommy-and-Me classes a year? I paid over $100 for 8 weeks of swimming lessons and I thought that was pretty nuts.

However, my point here is not to disparage upper crust NY parents (fun as it is). It's to ask aloud how is it that we, as parents, are supposed to be both responsible for the education of our kids yet still socially responsible at the same time? For example, one thing I've been looking at with GreatSchools.net is the ethnic breakdown of different elementary schools and I'll be straight-up: I'm more than a little uncomfortable at the idea of sending L anywhere that has more than 2/3rds majority of any one ethnicity, especially in Los Angeles. I've basically written off any elementary school - regardless of academic quality - that has more than a 50% white majority (no doubt, Sandra Tsing Loh would approve). However, I also have balked at schools where the Asian population is more than 50% since that, to me, seems highly socially distorted (except in, say, Hawaii). Provided, I've probably lived in the Bay Area too long so I wonder if I'm not being just a tad too p.c. about this whole thing.

But let's put ethnic breakdown aside for a moment - I'm not sure what to think of charter/magnet schools (public, not private. In fact, let's not even get into private schools...that's one some whole next level confusion for me). Should I be encouraged by alternative styles of pedagogy? Or concerned that some of these schools' test scores, on paper at least, look abysmal? I could pretty much give a fuck about the obsessive drive towards standarized tests that's infected the public school, post-No-Child-Left-Behind mindset but at the same time, I admit that I use those scores as a basic form of evaluation. Ultimately, I'm just not sure how to even judge these schools...I barely remember my own elementary school days so I'm not sure what kind of criteria I should be bringing to bear here.

And just to note this again: L is 15 months old. She's at least three years away from actually attending pre-school, let alone needing to feed into a K-5 system. Aiya.

So how did you other parents figure this out?

Unrelated (but interesting) news: German non-mothers are going against evolutionary impulse; could Americans be too far behind?
Posted by O.W. at 3:47 PM 10 comments: 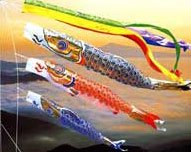 While many of you were tying one (or two, or three, or...) on last Friday in celebration of a long-ago battle in which the Mexican army beat back the French [yeah, no, it's not Mexican Independence Day, but you knew that, right?], parents of little nikkeijin boys were flying koi flags in their yards, displaying dolls on the mantle, and letting their sons mess around with plastic samurai swords in the name of culture. Okay, I'm sure there were dads who were doing both at the same time, 'cause who says margaritas and swords don't mix?

Yes, I'm talking about the other Cinco de Mayo holiday, Japanese Boy's Day. Yeah, I know, it no longer "officially" exists in the ancestral homeland, having been replaced by Children's Day, but here in America, the great-grandchildren of immigrants still fly colorful carp banners every May 5th, in the name of celebrating strong-willed (the swimming-upstream analogy) little boys. When I was growing up, we would put a koi flag in the backyard, put a little decorative-samurai-helmet-and-sword thing up on the mantle, and mom would give me and my hakujin dad presents (my family's big on gift-giving holidays).

So Dear Wife is at a medical conference (read: road trip with the Sisterhood of the Traveling Scrubs) and I've got The Hudster for a solid four-day daddy-only roadblock--weekend through Tuesday.

For what it's worth, I was actually primary caregiver for Hudson for several early months due to a career transition (insert euphemism of choice), and Hudson's still experiencing an estimated 5:4 ratio of daddycare to mommycare, due to my more flexible work arrangement. (To be fair, the real ratio is probably more like 5 parts daddy, 4 parts mommy, 3 parts daycare, 2 parts grandma, and 1 part Bob the Builder.)

In any case, soloing is no big deal, even for a four-day stretch. We manage to stick to schedule fairly well, even if I occasionally have to juggle making breakfast and phone calls, and even if it means more after-sleepytime-hours grinding on my part than usual. He's still demanding that a parental unit sit with him until he dozes off, but he's fine with my bringing my laptop into the room and touchtyping in the dark (although last night, I woke up with a start at 3 am in his room, my left cheek bearing the distinct imprint of my lappie's keyboard).

It helps to fill the big time blocks with structured activities, however. Saturday we went to get muffins at Blue Sky Bakery, then to the playground, then to my sister's place for him to play with his cousin Evan and stare at his new baby cousin Sienna. Pizza for dinner, then LeapPad and two books, then sleep.

Sunday was a group playdate at The Bronx Zoo. The tigers and snow leopards were a hit, but the polar bear was dirty and looked stoned, the penguins were hiding from the paparazzi, and the everything cost a bunch of cash. Lovely day and the kids had a great time, but since when did a trip to the zoo cost as much as a trip to Six Flags? Pics here, if anyone's curious. Hudson's in the yellow, and yes, he's smoove wit da ladies in a way his daddy never was.

I know four days isn't really that long. The "structured activity" ideas I have probably could stretch about 10 days, before my career and/or sanity starts taking a hit. Fortunately, I doubt I'll need to go without collaborative parenting for much longer than that. Still, any of you fellow Ricepops and/or moms have long-term soloing stories or cool full-day activity sugestions to share?

Note: I can feel SAHD's and SAHM's palpable lack of sympathy through the web connection. :)
Posted by InstantYang at 8:16 AM 1 comment:

Soccer Dad: Balling Out of Control

It’s a World Cup year and I’ve got TIVO—a dangerous combo. I don’t think I mentioned this but Maceo’s middle name was this close to being “Ronaldinho.” It was a whimsical outside bet but the guy, as brilliant as he is on the field, is just too damn ugly. Mase is a cutie boy.
When I tossed the possibility of acquiring a brilliant Brazilian footballer’s middle name to friends, some suggested “Pele” instead. That’s like naming your kid God. The expectations are set too high.
Mase and I will watch some soccer games together—mostly FC Barcelona games where ‘Dihno plays including their recent run in the UEFA Cup. The flow of the game isn’t too crazy for him. Soccer isn’t like American football with all the quick cuts and timeouts. The visual spectrum rarely changes. I read that kids attention spans are wrecked because of television so I limit this exposure and catch up to the game when he’s sleeping. TIVO rules.
But this has happened a lot: he’ll be playing or just kicking it nearby and 'Dinho or Eto’o will create some amazing play or miss a shot and I go “OHHHHHH!!!!” and slap the couch arm. Mase is getting over being startled by these Tourette’s-like outbursts, which gives me great pride.
It is also with great pride that I, Soccer Dad, announce that Maceo said his first recognizable word yesterday. What was it? “Daddy”? No. “Mama”? No. “49ers”? No, thank Pele.
It was “BALL”—with the helpful prodding of mom, while I kicked said ball to him. Sounds like kismet to me. Maybe it isn’t too late to change his middle name to “Ronaldinho.” :)
Posted by Soccer Dad at 1:51 PM 2 comments: