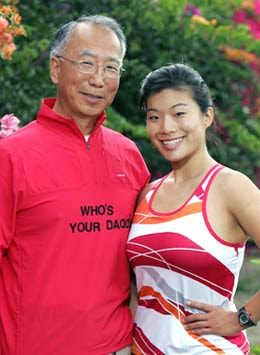 First there were the Cho brothers and the Patels on season 10. Now, for those of us who like to play the "oooh, there's an Asian American on a reality competition show (that's not Survivor: Race War Edition), look!" game [and hell no, I ain't watching that Tila Tequila thing on MTV], season 12 of CBS' Emmy winner (and the only reality show my wife and I watch) brings us an Asian American dad/daughter team.

The newest TV rice daddy is Ronald Hsu, 58, of Tacoma, WA, the vice-president of a paper packing company and father of teammate Christina Hsu, 26, a policy analyst in Washington, D.C. According to their show site profile:

Ronald & Christina are a father/daughter Team who are competing in the Race to make up for lost time. Since Ronald was constantly traveling for work throughout much of his daughter's formative years, Christina hopes the Race will allow her father--a self-proclaimed workaholic--to stop and smell the roses and provide them with some meaningful time together.

Ronald, a first-generation immigrant and eldest of five, works as a Vice President of sales for a paper packaging company. His proudest achievements are his thirty-one years of marriage and raising two independent daughters. Christina is Ronald's youngest daughter and holds degrees from both Duke and Princeton. She once served in the State Department and often wishes her Teammate could be as diplomatic as she.

Neither are strangers to the unpredictability of international travel as they have both lived and worked abroad. Ronald describes himself as inquisitive and open-minded, while Christina describes herself as loyal and adventurous. This father/daughter duo is excited to grow closer, make friends across continents and create Race history by being the first father/daughter Team to claim the $1 million prize.

You go, Ronnie! Represent, brother—and we'll be watching on November 4.
Posted by daddy in a strange land at 12:12 AM

I'm definitely rooting for them!

I think you forgot that we watch A LOT of TV, babe. What about Ace of Cakes, Hell's Kitchen, American Idol, So You Think You Can Dance? I'm sure there's more.

But Amazing Race is my favorite!!

I noticed in the pic that they are two of the few who look genuinely happy. I hope they have/had a grand time together.

contrary to what Bushelandpeck said, I think these two are the most sterotypical-looking successful-asians I can imagine -Workaholic immigrant parent. Ivy-league kid. Perfect teeth. Totally clean cut. OMFG.

Of course, they are going to wipe the floor with the other teams' asses, they are so freaking overqualified.