Help inoculate our kids against bigotry...

My parents are against same sex marriage. At their advanced age, there's no convincing them otherwise. They are devout Catholics, and so they believe everything in the bible as it is interpreted by the Catholic church.

Most of the people I know who are against same-sex marriage are just like my parents: elderly, religious, set in their ways. Fortunately, their old age means that they'll be dead and gone in a decade or two. In the meantime, the best we can do is to inoculate our children from such bigotry.

Like many other parents our age, we've made it a point to be socially progressive in the upbringing of our kids. When gay marriage became legal in New York, my wife brought home the front page of a newspaper to show our daughter that two girls can marry each other (and one day you'll see two Disney princesses fall in love with each other, we hope). 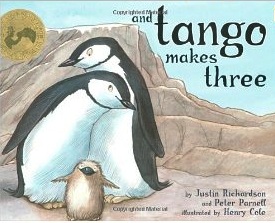 After reading this post over at 8Asians.com about a gay penguin couple in a Chinese zoo, my wife suggested getting a copy of And Tango Makes Three. This controversial children's book is based upon the real-life gay penguins Roy and Silo at the Central Park Zoo who were allowed to adopt and raise an abandoned baby penguin. Our four year old daughter loves and collects stuffed penguin toys. What better book to get her?

But why stop there? How about other people's children?

At our local Catholic church, there's a Christmas Giving Tree with postcards hanging on its branches. Parishioners are encouraged to take one of the hanging postcards and return it with whatever gift is requested on the card. All gifts are donated to needy children. Here's the card that we got: 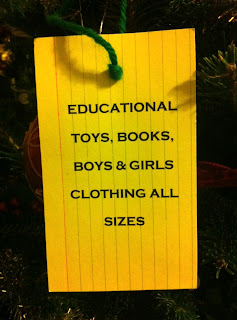 Can you guess which "educational book" we'll be donating to the Christmas Giving Tree this year?
Posted by SoulSnax at 10:48 PM

And even more... how about just giving "children's clothes," not clothes specifically for either girls or boys? :)