Asians in the movies. 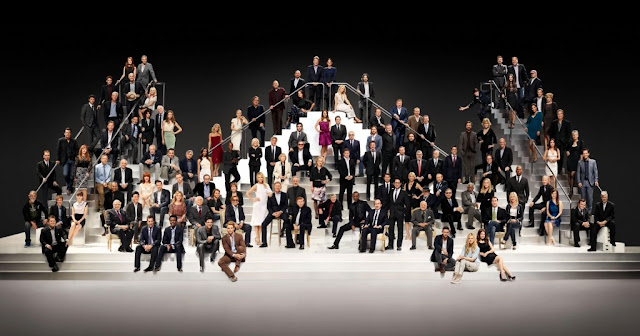 Link to the larger image: Link

116 of Hollywood’s greatest stars on one stage at one time to celebrate Paramount Studio’s 100th anniversary. It's interesting to see which stars were actually chosen. I guess in some respects you have to be happy to see at least three Asian faces in the group, from left to right: Tommy Chong, George Takei and John Cho. The interesting part to me is the under-representation of Asian females in the group (perhaps Lucy Liu and Sandra Oh were booked that day). Anyway, photographically speaking it quite a feat to have such a large group together and apparently not that much photo-shop trickery involved. For those of you photo geeks out there (like me) here's the set up info, the shot was taken by famous celebrity photographer Art Streiber:


The 40-foot stage, 116-person photo needed flattering, even light all the way across. This setup used no light stands, no C-stands and no medium or high rollers. Instead, Art’s crew of 10 assistants used 57 Profoto heads, and gridded 34 of those heads with Magnum P50 dishes as the key light. Because the stage was so wide, he couldn’t use a big side light. Instead, Art would have to light from above. He decided to mimic the “Broadway” style stage lighting, which is a fairly hard light source, up high above the audience. 63 frames on a Hasselblad H2 camera with the new Phase One IQ-160 back and a 150mm lens, provided by his digital tech, Eric Vlasic at With Technology. He shot the photo in three sections, and his retoucher, Angie Hayes at the Happy Pixel Project, seamed the images together in post. However, it’s important to note that all 116 people were on stage at one time. Nobody was stitched into the photo, nobody was added in post.

Thanks to FStoppers for the post.
Posted by Obiwanhavanese at 10:54 AM

Very nice photos! thanks for sharing the blog.I wish you to post the new updates regularly.

Very cute photos!!! thanks for sharing the post!. I wish you to post the new updates regularly. Thank you.

These are really good photos. Thank you for sharing it with us, keep posting more such posts