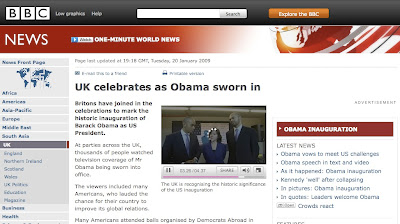 "Their mood was shared by those at the UK's inauguration parties, many which involved an element of black culture."

Having lived in England in the 90s, I have a general idea of what "black culture" means in the UK, mainly in a popular-music sense. But I have to wonder what exactly the above quote means when discussing a British celebration of Barack Obama's inauguration. Did they feast on fried chicken, collard greens & BBQ ribs, or Jamaican beef patties and johnny cakes, or dibi with couscous and plantains? Did they listen to Pinetop Perkins and Run DMC, or did they listen to Seal and Corinne Bailey Rae?

It reminds me of a time in college when someone assumed that because I was Filipino, and since Filipinos are Asian, and Buddhism is a part of Asian culture, then my family probably didn't celebrate Christmas.

Then there was another instance in which my wife was working on a presentation about the Philippines, and the director of the organization suggested changing the font to something "more Asian," like what you see on Chinese takeout cartons. Because, you know... just like Black culture, there is only ONE Asian culture.
Posted by SoulSnax at 9:50 PM

Wow your wife should have hit the director with a set of nunchaku, arnis, tonfa, and followed up with round house kick upside his head to knock some sense into him!

Man, one culture indeed. Sometimes I think we are one culture because of our slanted eyes you know? Then I remember I like kimchi, and not sour mustard squid sauce. Oh, wait, I like that stuff, too.

My understanding, having lived on and off in the UK for the past 13 years, is that "black culture" is considered to be an inclusive and self-consciously constructed political term which encompasses not only people of African and Afro-Caribbean origin, but also people of South Asian, South East Asian, and East Asian descent. In some cases, the term has also been inclusive of people of Middle Eastern descent as well. Basically, because the ethnic minority population is relatively small in the UK, for the purposes of coalescing and having a stronger political voice, people from a variety of ethnic groups in the movement for equality made a conscious decision in the 1980s and 90s to join forces in this way. Government subsidies for artists' grants, scholarships, language-sensitive legal assistance programs, language-sensitive health programs, community projects, cultural outreach programs, and many other structural benefits have been obtained under this banner. It may seem reductive from the outside, particularly to those in the US where the particularities of culture carry a lot of meaning and political purchase, but I do think the intention behind "black culture" in the UK has been effective and powerful. It's actually quite affirming to see so many different minorities put aside their differences and come together for the common good. It carries something of the idealism and possibility of the early Civil Rights movements in the US before separatism, factionalism, and the old divide and conquer ruse reared its ugly head. I'm not saying that things are perfect in the UK, or even that minorities are doing things better there, but I do think there's something to be learned from the ideology and language of "inclusion" rather than "tolerance."

Nice post. People can be so ignorant at times.

Very good point, though sometimes folks also forget that various Asian, African, and Middle Eastern countries are always talking about "western" culture...as if every white person from Germany to Spain to England to New York to DeMoines, Iowa was also the same culture...don't tell me that isn't the case even with folks in the U.S. thinking all whities are the same ethnicity... ;-)